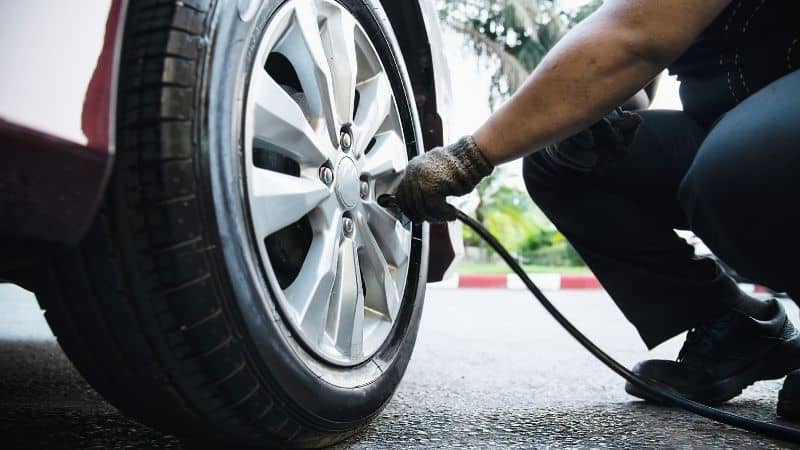 It probably crossed a few people’s minds here and there: why don’t we just use an all-rubber tire instead of dealing with the hassle of putting air in the tires and the possibility of having a blowout or a flat?

The answer is simple and semi-complexed at the same time, but when you find out the answer, it sure makes sense. An all rubber tire would not only be dangerous to drive on, but it would also be uncomfortable, and in this article we’ll explain why!

Why Do Tires Need Air?

It’s common to wonder why we have to put air in our tires, especially when it causes a flat or worse a blowout, but there are good reasons, so read on to find out why!

Why Do Tires Need to Have Air?

First off, the air in the tires is what seals the tires to the rim.

Without air pressure, there would be nothing holding the tire in place, and your rims would just spin inside the tire, meaning you and your vehicle would be going nowhere.

You might wonder why the whole tire isn’t made of rubber, canceling out the need for air.

Well, since air is a substance that can be easily manipulated, it makes for a better setup that offers many more advantages than an all rubber tire.

Read More:  Under Inflated Tires Symptoms (8 Things To Be Aware Of)

Rubber is indeed a softer material than steel or wood, but as a whole, it would not offer you much in the form of a cushion when hitting bumps, rocks, or potholes.

Air can be compressed, allowing the impact of things we run over or hit with our tires to be dispersed in a much more even matter.

Also, an all-rubber tire would wear out just as fast as a compressed air tire – meaning there would be no advantage.

Can Tires Be Made Without Air?

For a couple of years now, companies like Bridgestone, Michelin, and more have been putting airless tires, also known as non-pneumatic tires, out on the market.

These tires are very expensive and are said to be the wave of the future.

Since airless tires are just now hitting the market for passenger cars, it’s really too soon to say how well they perform and if they are truly the wave of the future.

But, like with all new technology, if airless tires catch on and work well, the idea will spread like wildfires, and technology to improve the tires will follow.

What Happens If You Don’t Put Air in Your Tires? 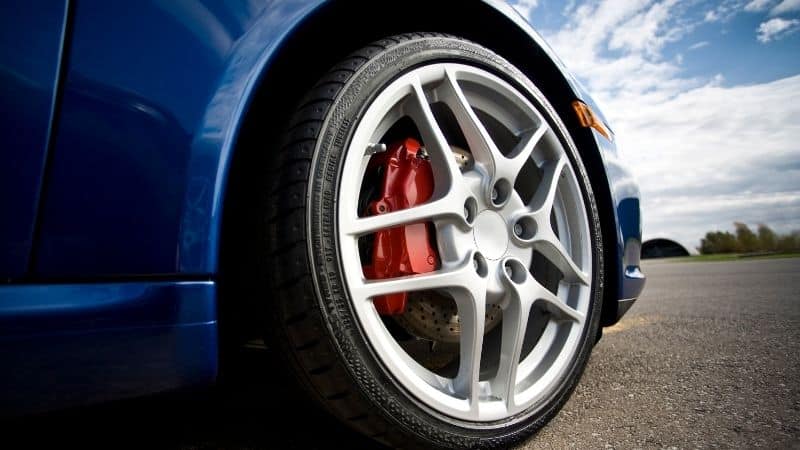 Keeping proper air pressure in your tires is essential to good traction, handling, braking, and even tire wear.

The manufacturer’s air pressure recommendation has been tested and confirmed as the best operating tire pressure for the best results.

Ignoring these operating tire pressure numbers could result in a blowout, accident, or a ruined tire and wheel.

Why Are Tires Filled with Nitrogen?

Read More:  Do Tires Have Metal In Them? (Why, How Much Metal + More)

Although it costs more to fill up your tires with nitrogen than air, some people find the benefits to be well worth the money.

At What PSI Will a Tire Explode?

Most tires are inflated to 30-50-psi depending on the tire and manufacturer recommendations.

When a tire heats up, whether it’s from the sun or being driven hard, it can raise the temp of the tire by 50-degrees, which will raise the psi by 5.

To make a tire explode from just tire pressure alone, it’s pretty hard to do, you have to get the psi up to about 200.

It’s more likely your tire will explode from being inflated over the manufacturer’s recommendation and hitting something in the road at high speeds.

Most air compressors don’t even have the power to get a tire’s psi up to 200.

What Is the Lowest Tire Pressure You Can Drive On?

Anything under 20 psi is considered a flat. Many race car drivers lower their tire pressure to get better traction, and they still don’t go under 32 psi or maybe a little less.

You should never drive on the roadway with a tire lower than 25 psi, as you would be a danger to yourself, your passengers, and anyone else on the road.

To know more, you can also check our posts on why do tires lose air, if you can put air in a spare tire, and how long do airless tires last.

Early in the 20th century, the idea of putting air in a tire for a more cushioned ride was created. Decades and many technology advancements later, the air pressured tire is still the most widely used tire setup than any other by a long shot.

Read More:  What Are Tilted Tires? (All You Need To Know)

Will airless tires/non-pneumatic tires take over in the future, sending air pressured tires to the graveyard?

That is yet to be determined, but as of right now, most of us are stuck with old-school tire technology that still works great as long as the tires are maintained properly.