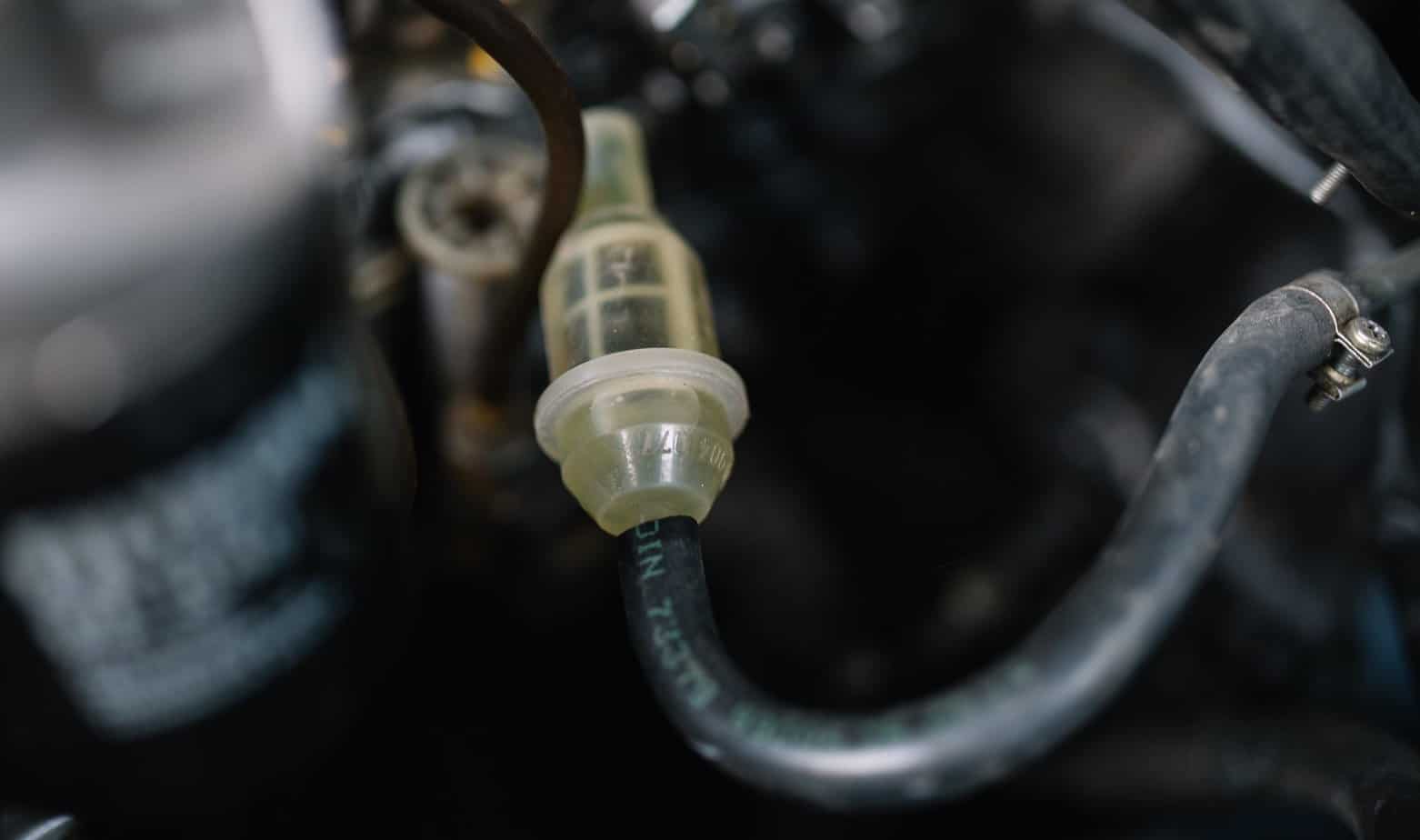 Every car contains a fuel filter between the engine and the fuel tank that will prevent any dirt particles from reaching your fuel tank.

Sometimes when the gasoline supply from the gas station where you load up fuel, dust, pollutants, and other tiny dirt particles may make their way further into fuel. It is where your vehicle’s fuel filter will take action.

Find out more about dirty fuel tank symptoms in this post!

1. The Check Engine Light On Your Car Will Alert You

Although the fuel filter is not often equipped with a sensor, poor fuel systems can cause the check engine light to come on.

Further, a dirty or defective fuel filter is a typical cause for the check engine light to activate on your dashboard.

Of course, some knowledgeable mechanics know the connection between error codes P0171 and P0174. These are connected to your car’s mass airflow mechanism and a lean fuel combination.

Also, these error codes indicating low-grade engine performance brought on by an issue with your car’s fuel system.

Simply put, a faulty fuel filter prevents your engine from obtaining the proper quantity of gasoline. It also has to do with a blocked fuel injector.

These are often some of the most significant symptoms that occasionally point to faulty fuel filters.

So, when you have difficulty starting your vehicle, or it won’t start, the fuel filter may be too filthy to do its job correctly.

That said, the fuel, which is crucial for your car’s internal combustion to begin, may also be prevented from getting to its engine as a result of this.

Occasionally, a car won’t start because there isn’t enough fuel flowing through the engine, so make sure your automobile has adequate fuel.

So, once you have checked the fuel and the car won’t start, the fuel filter is likely clogged with debris. When the engine begins too slowly compared to normal, your fuel filter is partially clogged.

Therefore, investigate any potential causes of your car’s failure to start.

The automobile occasionally refuses to start when its fuel filter is severely blocked or highly unclean.

Particularly while mounting steep hills, the car will act as if you’re running out of petrol and finally comes to an abrupt stop.

However, if your car repeatedly exhibits these behaviors, it may be because the motor is running low on gasoline.

As a result, the engine stalls. Generally speaking, a filthy fuel filter can prevent an adequate amount of gas from successfully reaching your car’s engine.

A further indicator that merits careful examination is if the fuel filter in your automobile is clogged with debris or is not operating as it should.

In addition, a clogged fuel filter is typically to blame when your automobile starts acting weirdly and slows down when traveling at certain speeds since there isn’t enough gasoline for it to go much further.

So even though you may be pressing hard on the gas, the car doesn’t budge, and the pace stays the same. 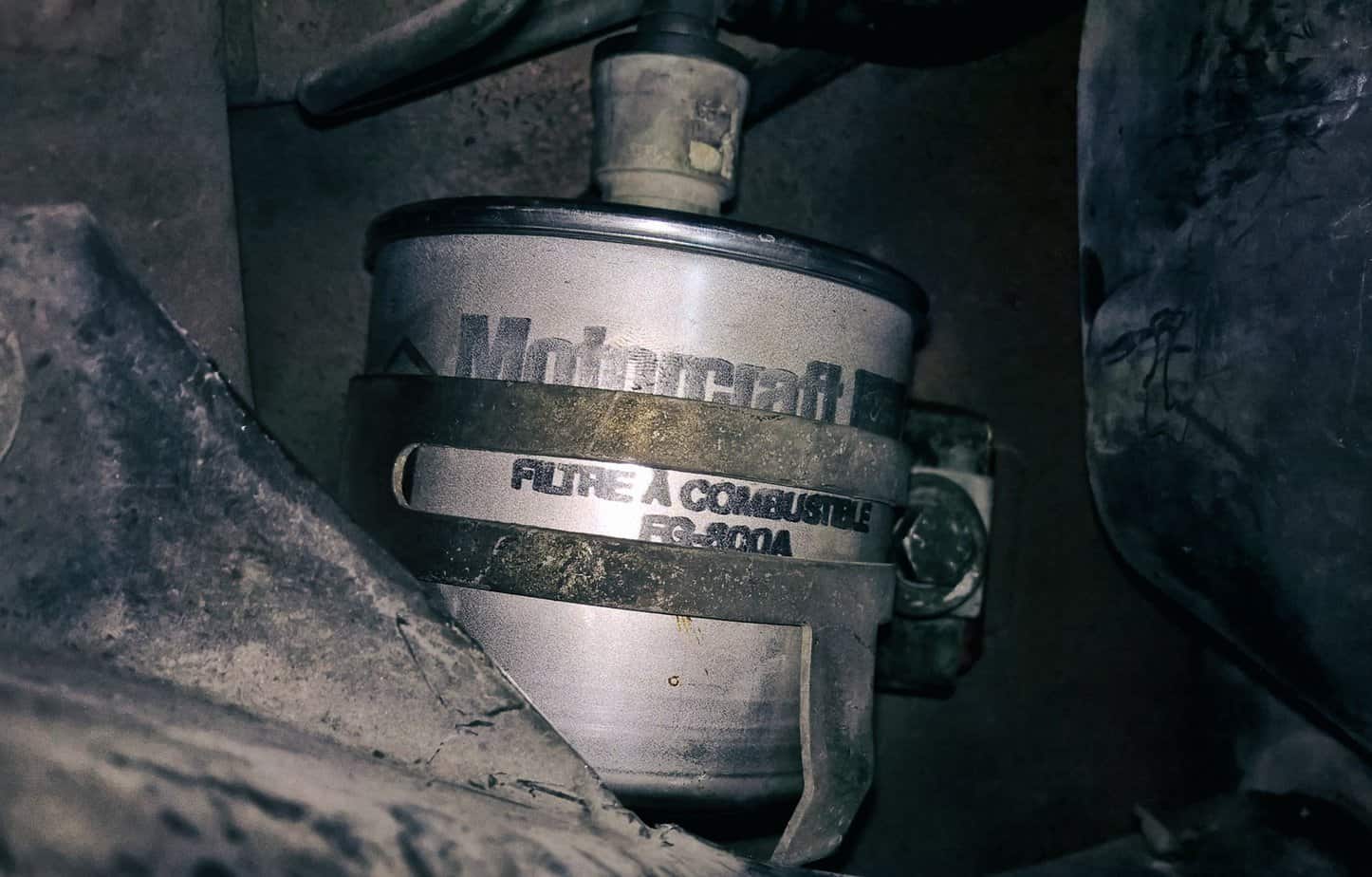 If you ever notice a foul smell coming from the car’s exhaust, it is likely that your fuel filter is blocked or covered in dirt and deserves attention.

Also, another clue that your car’s fuel filter needs cleaning or changing is if the exhaust fumes from the engine are black and murky.

Finally, frequent misfiring is another vital sign that the fuel filter in your automobile is not working correctly.

The engine will often start in such emergency conditions, though it may stop unexpectedly.

So, it implies that when the car accelerate, enough fuel is passing through the fuel filter, but when it is idling, there isn’t enough fuel inside the engine, affecting its idling problems.

Therefore, examine your fuel filter to see if any signs that indicate it needs to be replaced since problems like these typically suggest that the fuel filter in your vehicle is either seriously damaged or very unclean.

Sputtering problems frequently happen when traveling at a low speed and when the fuel filter has a slight obstruction.

However, after a while, you won’t have any option other than cleaning or replacing the fuel filter, or further engine damage will happen to your vehicle.

Your car may run poorly or stall out if the fuel pump is faulty, which causes the engine to starve for gasoline.

The gasoline pump may also have to be replaced if you find that your automobile is having trouble starting or operating smoothly.

Additionally, as soon as you notice that your vehicle is using more gasoline than usual, you should get it inspected by a qualified technician.

A new fuel filter is required to ensure proper engine function whenever this occurs to any vehicle.

Last but not least, occasionally, fuel will miraculously pass a filthy or defective fuel filter yet significantly block the carburetor or injector of the vehicle.

As a result, this will lead to engine stalling, start-up issues, misfiring, and much more. A total decrease in engine performance will start to show.

Overall, without a well-functioning fuel filter, your vehicle will not perform at its best, as a fuel filter is crucial in keeping your fuel clean and free of contaminants.

That’s why knowing every symptom that may arise is essential in preventing further damage that will lead your vehicle to a much more severe issue.