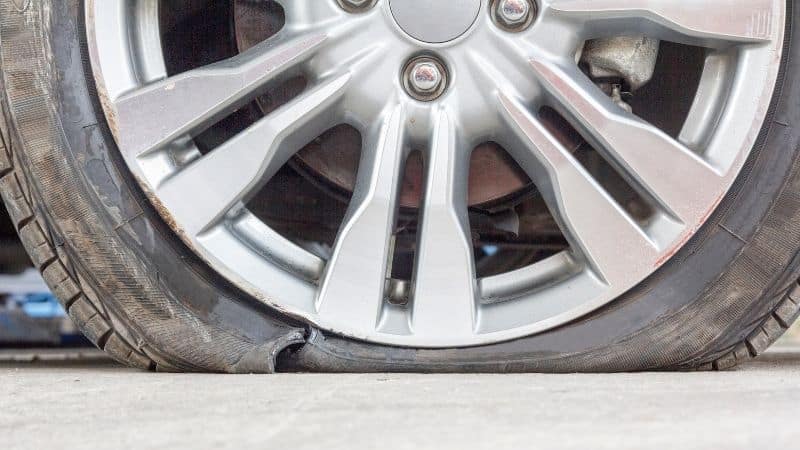 Slashing your tires may be the only solution to get your vehicle moving when pushing your car, though it may also be due to pure vandalism or driving over spikes.

Nevertheless, it’s known that when slashing tires, you only need to slash 3 tires- but what’s the reasoning behind this? If you’d like to find out, keep reading!

Why Only Slash 3 Tires?

To learn more about why people slash tires, preventive measures you can take to prevent tire slashing, and how to determine a slashed tire, read on!

Is It True That You Should Slash 3 Tires Instead Of 4?

A lot of people think that slashing only three tires means more of a headache for the car owner because their insurance won’t cover it, but this is a myth.

Why Do People Slash Tires?

Most of the time, slashing tires is a deliberate act designed to limit movement as revenge. Some people may do this to your wheels to settle a dispute.

Common suspects of tire slashing include exes, disgruntled employees, angry neighbors, someone you got into a fight with recently, among others.

Intentional tire slashing is a criminal offense. Depending on the situation and if you know the perpetrator, you may opt to seek charges against the individual who slashed your tires.

Doing so would require you to go to the nearest police station and file a police report. Note that each state has its own rules when it comes to tire slashing.

However, unless you have a high-end car with high-end tires, the crime is likely to be labeled criminal mischief and treated as a misdemeanor.

How much damage is caused is what determines whether it is a criminal act or not. A misdemeanor criminal mischief conviction might result in a fine, light time in prison, and/or probation.

How a person is charged relies heavily on whether the tire slasher has committed previous infractions and demonstrates real repentance.

Should You Report Slashed Tires? 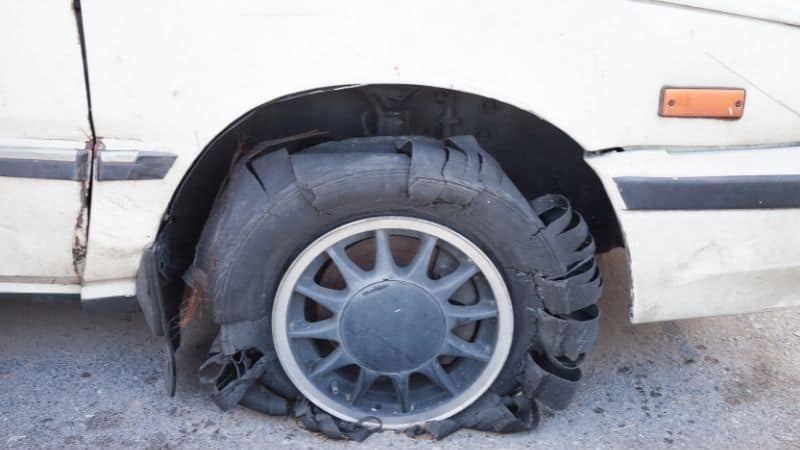 If you suspect someone has slashed your tires, the first thing you should do is file a police report.

If you see the act, take down any information you can about the culprit (from a safe distance, because they’re presumably slashing the tires with something sharp).

After that, you’ll need to get your tires repaired or changed at a shop, and then make a claim with your insurance company.

Unfortunately, if you aren’t protected from cut tires under your package, you may have very little recourse.

How Do I Stop My Tires From Being Slashed?

Locate a well-lit and safe parking spot for your vehicle. If you don’t have access to a garage or need to park far from home, look for a safe and well-lit public garage.

If you park in front of your house, consider installing motion sensor lighting, as they may be scared away by the sudden appearance of lights.

Read More:  Tire Leaking Air Around Rim (What To Do, Can You Fix It + More)

Install surveillance cameras at the front of your house. You might be able to identify the individual who slashed your tires if you watch the footage.

Police should be notified of the slashing. It will assist if the offense is recorded, especially if the culprit is a repeat offender.

In an area where there have been several slashings, the police may keep a closer check on things. If the perpetrator knows the police are monitoring, they may be hesitant to attack again.

If this is happening in your community on a regular basis, you may want to start a neighborhood crime watch, because if criminals are aware that they are being monitored, they will strike less.

How Can You Tell If A Tire Has Been Slashed?

Make sure you have all of your facts straight before filing a claim with your insurance company. Examine the cuts to see whether your tire has been slashed.

It’s typically very obvious if your tires were just damaged by road debris or if they were slashed, as slashed tires normally have much cleaner cuts on the sides of the tires, whereas road debris damage usually occurs on the bottom of the tire.

However, it’s conceivable that the tire’s sidewall split apart as a result of minor damage and road wear, though officers and mechanics will be able to provide you with a more thorough assessment.

Will Insurance Cover Only 3 Slashed Tires?

As stated above, it’s a popular misconception that three slashed tires are not covered by insurance and that it has to be all four tires for the car owner to file for a claim.

Read More:  Car Shaking After New Tires (What to Do + Does It Go Away)

However, comprehensive coverage will cover all three slashed tires or any number of slashed tires, whether it’s one or all four.

Can You Plug A Slashed Tire?

You can plug a slashed tire, which may be a better option than sealants as an alternative, but keep in mind that this is only a short-term solution.

A plug can be inserted into the tire for an ideal temporary fix if there isn’t any internal damage.

To find out more about tires, you can also see our posts on how to slash tires, why do people slash tires, how to prove someone slashed your tires, and if you can change tires without a jack.