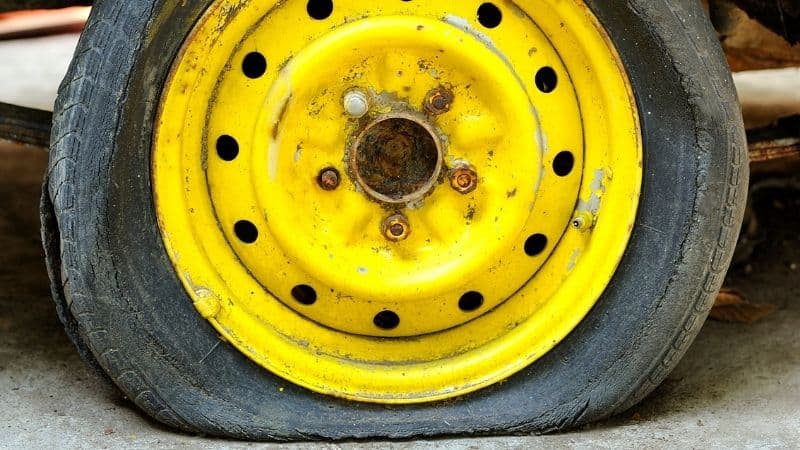 It’s not the most pleasant feeling to find that your tires have been slashed, especially if you had an important place to get to on time.

Therefore, listed below are the best strategies that will assist you in proving that your tires were slashed.

How Do You Prove That Someone Slashed Your Tires?

Tire slashing is usually a hard thing to prove, meaning you will have to rely on some clever strategies to identify the tire slasher, such as capturing CCTV footage, considering potential suspects, checking their internet activity and a number of other useful methods.

If you’d like to learn more tips on how to get concrete proof that someone slashed your tires, keep reading this article for useful information!

Nowadays, CCTV cameras can be found almost anywhere. Therefore, look around the location where you parked your car for a CCTV camera if you believe your flat tire was caused by slashing.

You can ask the camera owner to show you the footage if you find one nearby. If tire slashing is a repeat occurrence for your vehicle, then it would be best to have your own CCTV camera to catch the perpetrator.

Since tire slashing is more likely conducted at night, it’s crucial that you purchase a camera with exceptional night vision, which will make it easier for you and the police to identify the perpetrator.

As well, floodlights (or keeping the usual lights on) can assist in significantly improving the video quality. Bullet cameras also offer greater night vision than dome cameras because the cover that surrounds the lens in dome cameras typically lowers video quality.

Read More:  Why Do Dogs Pee On Tires? (Preventing + Does It Damage Tires)

Alternatively, you can get a dash cam that runs when you’re not in your vehicle.

2. Look At Your Personal Relationships

Slashing tires is something that former friends and significant others are known for doing, which is why they’re usually the first suspects that the investigation turns to.

Therefore, explore this possibility and try to prove their involvement by confronting them and watching their reaction. You should also record the conversation so that you can have documentation if you decide to bring charges against them.

3. Look At Your Recent Interactions

Most people who have experienced tire slashing have connected the act to someone who held a grudge against them. Apart from an angry former partner or friend as mentioned above, a disgruntled employee or a mean neighbor can also be a perpetrator.

In vandalism-related cases, the police will want undeniable evidence of the allegations you’re bringing, so if you merely tell them the offender informed you personally, they’ll most likely deny it.

Therefore,try recording the entire conversation on your phone or other recording device, but do it discreetly so as not to compromise your shot at success.

5. Get Some Guard Dogs To Catch Them

You can place your guard dog around the area where the incident is most likely to occur and let it do what it’s trained to do (i.e. wreaking havoc on the perpetrator, or notify you if there’s an intruder in the vicinity).

This helps you catch the perpetrator red handed and have a stronger case against them.

Read More:  Wheel Balancing Symptoms (8 Things To Be Aware Of)

6. Wait And Catch Repeat Offenders In The Act

Acts of vandalism are more likely to occur during unusual hours, not necessarily at night, but at times when there is often less human activity in the area.

In such a scenario, make a conscious effort to be attentive during certain times in order to catch the criminal in the act, even if it means losing a few hours of sleep.

Even sleeping in your car for a few nights demonstrates how far you’re ready to go to capture the criminal in the act. However, only do so if your windows are tinted, as they provide cover and protection should the perpetrator appear again.

7. Look Through Their Tools

If you’re able to access the tools of someone you suspect slashed your tires, you can look through them for something that could have been used.

For instance, a knife that was used to slash a tire will likely be bent and have black streaks and stains from cutting into the rubber.

8. Look At Their Hands

Slashing tires is not something that would be easy for a first-timer, and it definitely takes a few tries to make a significant cut. Therefore, chances are they would likely have hurt themselves.

So, you can check the hands of someone you suspect for injuries that would result from a few failed initial attempts, such as small cuts around their fingers.

If you have access to the browsing history of the person you suspect, you can have a look at their searches for something that points to research on how to slash tires or something similar.

10. Set Up A Marking Mechanism

You can fill up your tires with gas that can have a mild but noticeable effect on a person, such as helium. While this may not lead to the arrest of the offender on the scene, it may offer you a hint as to who the perpetrator is, especially if they remain close by due to the effect of the gas.

However, ensure that there aren’t any innocent victims nearby.

Because your neighbor is an outsider, their remarks will be more credible than those of your spouse, sibling, or any other close family member.

Take some time to chat with your neighbors and keep them up to date on what’s going on in the neighborhood, as this will also assist everyone in the area keep a closer look at your car and your surroundings in general.