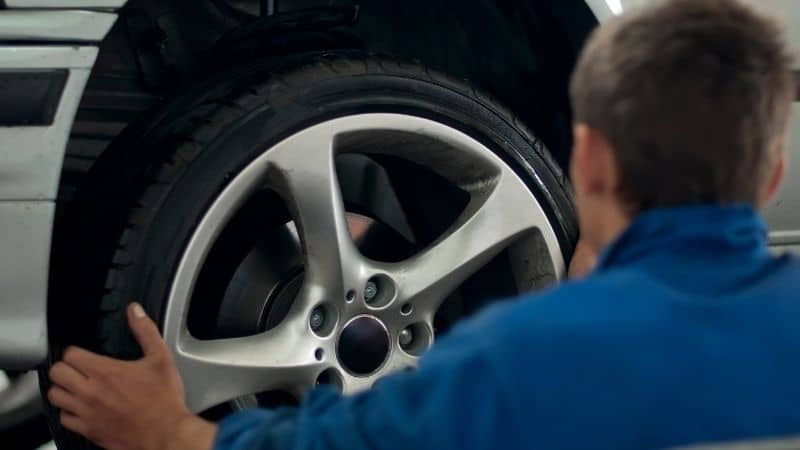 Your tires are some of the most important components of your vehicle and you need to ensure they perform at peak levels for maximum safety.

This article will help you keep an eye on tire wear depending on what kind of setup you have as well as provide some pointers on how to care for them.

In most cases, front tires wear faster out than the rear tires as they’re used for braking and steering. However, there are other factors that can determine which tires wear faster on a vehicle, including weight, vehicle usage, power system, and also whether or not the vehicle is AWD, FWD, RWD, or 4X4.

If you want to learn more about tire wear, including which tires last longest, which side is likely to wear faster, whether to replace front or back tires, tire wear on 4WD, FWD, 4×4, tandem axle, and more, keep reading!

Which Tires Wear Faster On AWD?

On an all-wheel-drive setup, the front tires wear faster because they’re the ones that do most of the braking and steering.

For this reason, even though the tires on all axles are used to generate traction, the ones on the front are subjected to more lateral forces.

Which Tires Wear Faster On FWD?

When you’re dealing with a front-wheel-drive vehicle, the front wheels will wear faster because they’re used to accelerate the vehicle, steer, and brake.

Which Tires Wear Faster On RWD?

Rear tires on a rear-wheel-drive vehicle wear faster, but not at a rate that’s significantly higher than that of the front wheels.

This is because they’re used for acceleration but the front wheels take on steering and braking so the wear should be more or less even depending on how you drive.

Which Tires Wear Faster On A Truck? 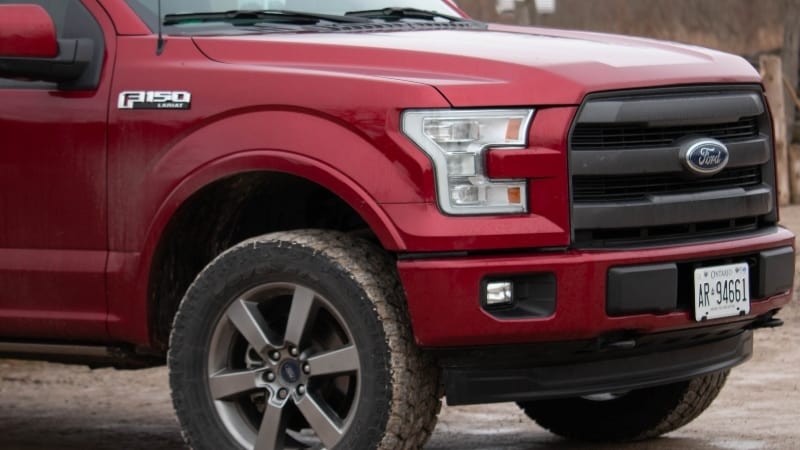 Like most other vehicles, wear on a truck depends on which axle is used for acceleration, so if it’s a front-wheel drive, the front tires will wear faster.

However, this changes depending on which axle supports more weight. If you’re loading your truck up in its bed, using a trailer or towing, you could find that the rear wheels wear faster.

A 4×4 or four wheel drive (4WD) vehicle powers all four tires equally, so the wear would be determined by forces other than acceleration.

This means that front tires, used for steering and braking, would wear faster than rear tires on a 4×4 vehicle.

This question is somewhat complex because the answer depends heavily on which country you’re in, i.e. what side of the road you’re driving on, and that influences which direction you’ll have to turn more at places like traffic circles or roundabouts.

For example, in the U.S. and Canada, where vehicles are driven on the right side of the road, drivers have to make a lot more left turns, and this shifts more weight to the right.

Inertia places more pressure on the right side of the vehicle, and the front right tire has to shoulder this extra weight on top of having to handle the turning/steering.

Another reason involves road construction, where the edges slope downwards into the curb to prevent stagnant water from pooling on the surface and causing hazards such as hydroplaning.

The right side would end up lower than the left, causing more weight to shift in that direction and when you add all this up, it’s a no-brainer that they would wear faster.

The issue is different in countries like Australia, the U.K., India where vehicles are driven on the left side of the road; the principle stands, but in the opposite way.

Which Tires Wear Faster? Front Or Back?

As stated in some of the sections above, front tires usually wear faster than rear tires, even when they’re not primarily used for acceleration, because they’re handling steering and braking.

Moreover, most vehicles’ weight is situated at the front (engine, battery, etc.) so this would naturally put more strain on the front wheels.

Is It Better To Have New Tires On The Front Or Back? 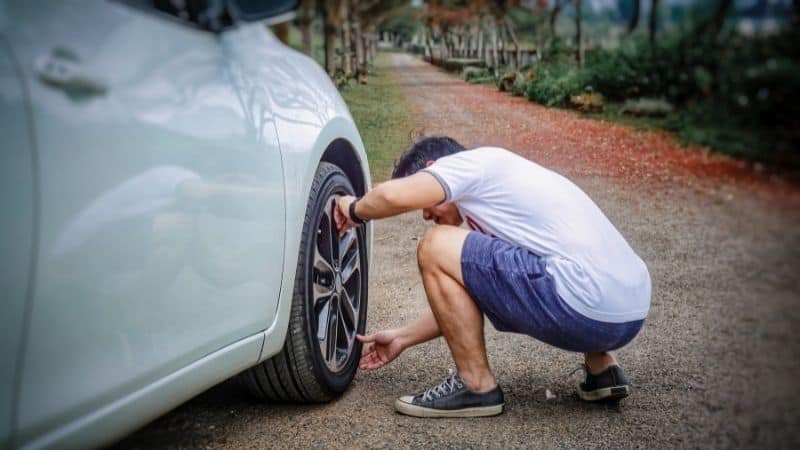 If you could only get two new tires for your car, your instinct would tell you to have them in the front since those are the wheels you control directly, but the right choice is actually the opposite.

In the event of a tire blowout, you’re better off losing the front wheels because the extra weight in the front we’ve mentioned above makes it more stable and you’d still be in control of steering.

Your car’s weight distribution would make fishtailing more likely if the blowout were to happen to the rear tires.

Which Tires Wear Faster In NASCAR?

Due to the nature of the sport, the tires used on every NASCAR vehicle wear out incredibly fast and have to be replaced multiple times during each race, so special considerations have to be made when creating them.

Goodyear is the primary manufacturer of NASCAR tires, and they build them by hand, keeping in mind the circuit’s layout: anticlockwise, meaning the cars only turn left.

What results from this is one set of tires that are designed specifically for the right side and one for the left, and mixing them up could have serious consequences.

As explained above, left turns place more force on the right side, so the right wheels are reinforced and wear slower.

NASCAR tires that go on the left are softer to allow the car to turn more easily, and thus actually wear faster.

Most Jeep Wranglers are RWD so, as stated above, wear somewhat evens out and depends on how you treat the vehicle.

Which Tires Wear Faster On A Tandem Axle Trailer?

On a four-wheel tandem axle trailer, the inside tires wear faster because when you make turns they slide as opposed to roll because they cover a shorter distance, and this slowly chips away at the tread over time.

What Tire Has The Longest Tread Life? 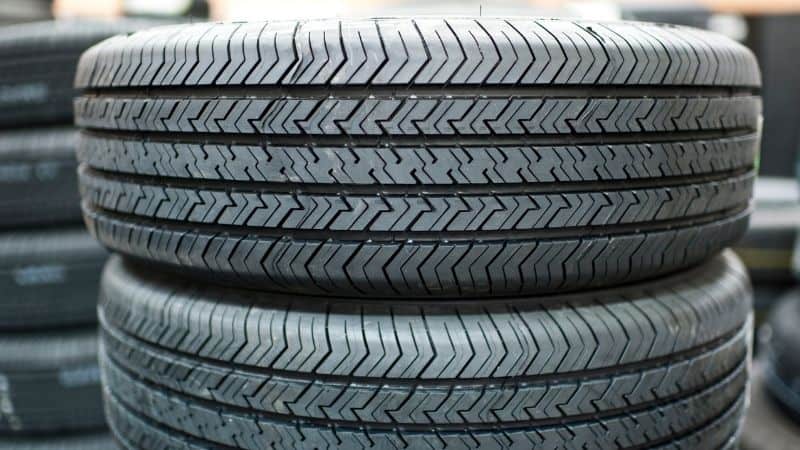 According to an earlier section of this article, independent research has found the Pirelli P4 Four Seasons Plus to have a long lifespan.

This same study found that Michelin makes reliable tires that either match or exceed their warranty.

How Can I Make My Tires Last Longer?

Regular tire and wheel care services such as checking tire pressure, alignment, rotation and more could go a long way towards getting the most out of your tires.

If you are looking to learn more, you can also see our posts on how long will tires last with bad alignment, which tires do you put chains on, and if tires have metal in them.

Front tires usually wear faster than rear tires, even when they’re not the primary set for acceleration – such as in an RWD setup – because they’re the ones responsible for steering and braking.

On an RWD, the rate of wear between front and rear tires could be even depending on how the driver treats the vehicle.

Front left tires wear out faster than front right tires in countries where you drive on the right and vice versa.

NASCAR vehicles have special tires that flip how they ordinarily would wear in response to the extreme nature of the sport, meaning that the right tires wear slower even though they always turn left.

Tire care best practices such as regular alignment and rotation help you extend their life, and April and October have been found to be the best months to buy new ones due to the potential for sales.