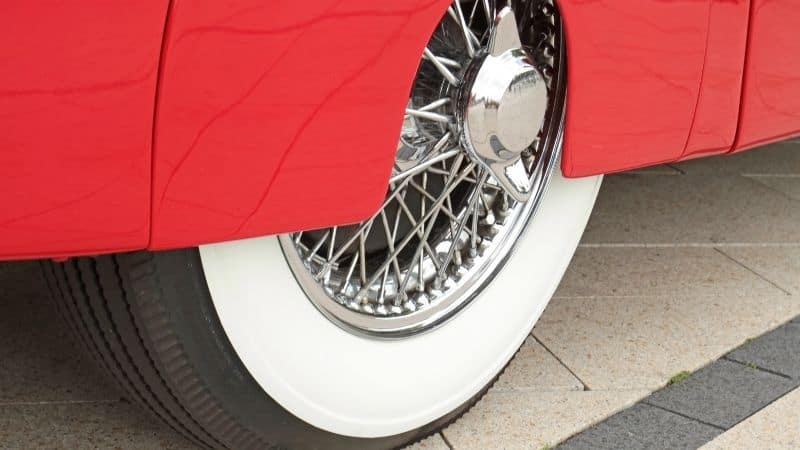 If you look back to the past, you’ll notice that tires were once white. However, tires today are mostly black, which begs the question as to why the color of tires changed.

You can purchase whitewall today, but they are exceedingly rare. For the most part, these tires are just like their black counterparts, but they are slightly different in some ways. For more information on how they’re different, keep reading below.

What Are Whitewall Tires?

Whitewall tires are tires that have a white stripe or completely white sidewall. For the most part, these tires were used from around the early 1900s to the mid-1980s, when they were phased out and overtaken by black tires. Their white color is caused by the addition of zinc oxide, which turns the rubber white.

For information on how zinc oxide changes the tire and why whitewall tires are rarely seen today, check out the FAQs below.

What is Special About Whitewall Tires?

Originally, all tires were white. Early on, tires were made from natural rubber, but they required some chemicals to be mixed in to make the rubber stand up better.

One of these chemicals was zinc oxide. When added to tires, this chemical increased traction, which led to better handling and safety. However, this chemical also happened to make the entire tire white.

Therefore, tires with whitewalls were created for purely practical reasons.

However, companies soon figured out that carbon black could improve the lifespan of tires. Therefore, many companies become adding this extra chemical, which turned the whole tire black.

Originally, completely black tires were used on luxury cars only. However, black tires with the added carbon quickly became the norm, with white tires soon being seen as the “fancy” option.

After that, whitewall tires were mostly seen as an aesthetic choice. Today, they are decently rare. For the most part, there are no factory options for white tires, and no modern car comes with them as a default.

For the most part, there is no actual benefit of using these tires on your car except for aesthetic reasons. 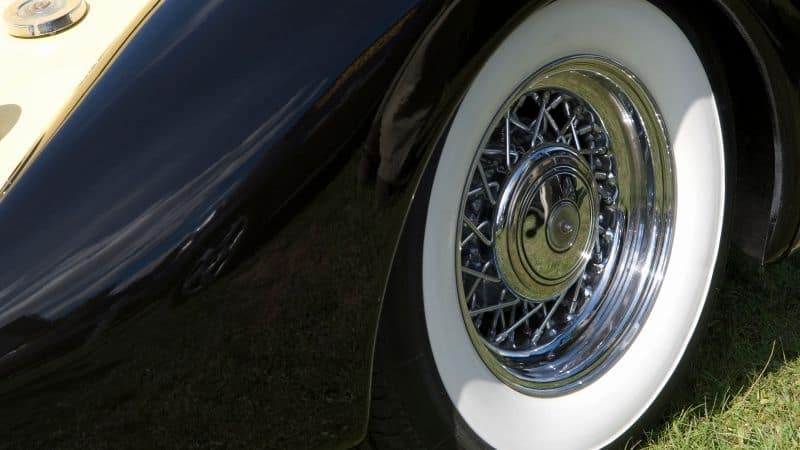 Back when they were invented, whitewall tires were as good as tires could get. However, today, there isn’t anything special about them. In other words, the white design is completely aesthetic.

Originally, whitewall tires did not contain added carbon, which is the reason that most tires are black today.

For this reason, they actually wore down faster than black tires, making them the worse option.

However, today, many manufacturers of white tires add carbon and make the tires white through other means. Therefore, these tires aren’t particularly different from other tires from a performance perspective.

Of course, different white tires will have different levels of performance – just like completely black tires.

Therefore, you should do your normal research before purchasing any white tires.

There is a lot that goes into a good tire, including white tires. While these tires may look different, the exact same principles apply when shopping for them – you just won’t have as many different options out there since white tires are less popular.

With that said, whitewall tires are the best option for classic car owners in many cases. Once again, this is not because of practical reasons. Instead, many classic cars simply came with white tires.

Read More:  What Are Kumho Tires? (Are They Worth It, Quality + More)

Therefore, if the owner is trying to keep the car as close to the original as possible, using white tires will be essential.

What is the White on Whitewall Tires?

Despite some common misconceptions, tires that are white are not painted that way. Instead, the white is caused by zinc oxide, which causes the rubber in the tire to turn white. Therefore, the white just isn’t going to scrap off.

After all, the rubber itself is white.

Originally, this chemical was added to improve traction, which it does very well.

Later, carbon black was added to tires as well. This black chemical was added to improve the longevity of the tires.

When added, this carbon overpowered the white and left us with black tires instead.

Why Don’t We Use Whitewall Tires Anymore?

For the most part, white tires were phased out for practical purposes.

Eventually, car manufacturers figured out that adding carbon black would improve the durability of the tires. Once this was added, tires started being black instead of white.

After that, having white tires was largely a fashion statement. Today, there aren’t many practical reasons to have white tires.

Plus, because they don’t have the added black carbon, they will be less durable than other tires out there.

Therefore, we don’t use white tires largely because we’ve come out with better ones – and that better option happens to be black. 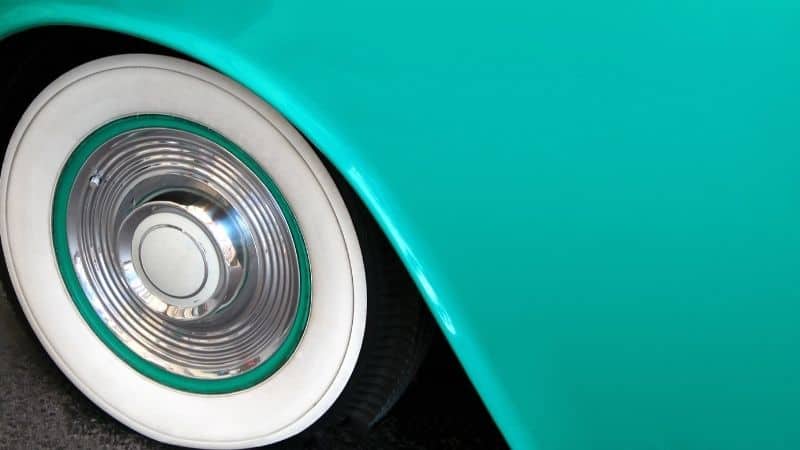 There are some cases where white all tires are illegal. However, these laws vary considerably from area to area, so you’ll need to check your local laws to be sure.

Read More:  What Are Low Profile Tires? (All You Need To Know)

In many cases, these tires are illegal because they are inferior to black tires. Some countries consider them a safety hazard since they may not last as long as black tires.

Therefore, they may be more likely to end up flat or blow while on the road.

On the other hand, other countries have banned them because some modern whitewall tires are simply painted.

In these cases, the tire is often buffed before the paint is added. In some cases, this buffing can induce weak spots, which may also be a safety concern.

Strangely enough, the United States once banned whitewall tires because of the Korean War effort.

Back then, there was a shortage of materials required to make tires white due to those materials being used in the war.

Therefore, the government saw it fit to ban the production of these tires in order to free up those materials for the war effort.

To know more about tires, you can also read our related posts on what are H-rated tires, if you can paint tires, and if tire shine is bad for tires.

Just as their name suggests, whitewall tires are tires that are white. Depending on the tire, they can have a completely white sidewall or just a white stripe, which is added mostly for aesthetic purposes.

Once upon a time, white tires were the norm. Between the early 1900s and mid-1980s, these tires were very common.

However, tire manufacturers eventually figured out that you could add carbon black to tires for improved durability, which led to completely black tires. After this, white tires were largely phased out, though they are still utilized on some luxury cars.