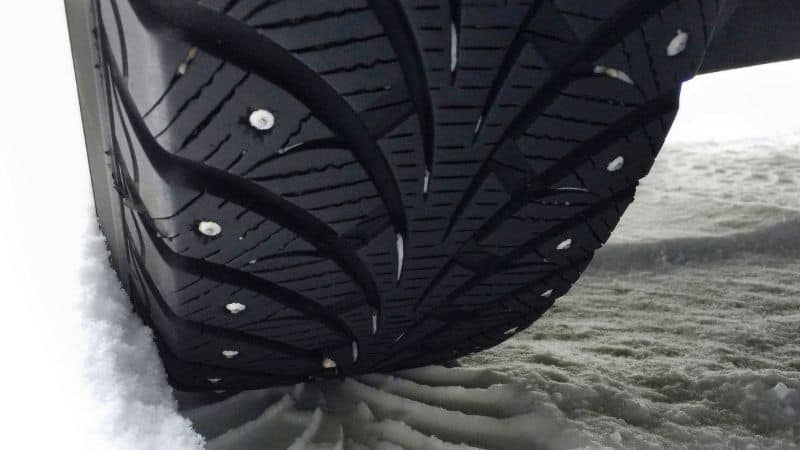 If you’re looking for a reliable way to drive during the winter you’ve likely heard of tire studs, but they’re not a straightforward solution.

Tire studs have specific conditions in which they work best, others where they pose a risk and best practices for installation, maintenance, and more, all covered below!

What Are Tire Studs?

Tire studs are small metallic spikes or protrusions fitted onto the tread, usually in the winter, to make driving on slippery roads easier. They come in different sizes and can be fitted depending on the tire’s tread. You can get studded or studdable options according to how handy you are with vehicle parts and accessories.

If you want to learn more about tire studs, including how they work, what size you need, whether or not you can remove/replace them, keep reading!

How Do Tire Studs Work & Do They Make A Difference?

Tire studs are intended to break through the ice to give the tires more improved grip and traction for better vehicle control on slippery roads.

However, do they actually make a difference?

Well, this depends on the surface on which the vehicle is being driven while the studs are installed.

Their effectiveness is most noticeable when driving on ice as they’re built to break through for grip and traction.

On snow, however, they lose out to tire chains – designed to give your tires more surface to grip the snow – as the surface isn’t rigid enough for the studs to break through and create a solid anchor that stabilizes the vehicle.

Moreover, when the roads they’re being used on are just wet (for example from rain) or completely dry, they actually decrease traction and worsen control; think of it as running on smooth bathroom tiles with football cleats.

Can You Stud Any Tires?

Due to their nature, it’s recommended that studs be installed onto thick tires. A good rule of thumb is to avoid tires with single-digit readings on the tread depth gauge.

Experts recommend installing studs on winter tires as they’re usually more readily adapted for them e.g. by being thicker and more resistant to stiffening in lower temperatures.

Can You Stud Used Tires?

You can but based on the pointers above, it’s not a good idea to install studs to used tires, as they could have worn to the point where they can’t support them as efficiently and this unreliability could pose a risk.

How Much Does It Cost To Stud Tires? 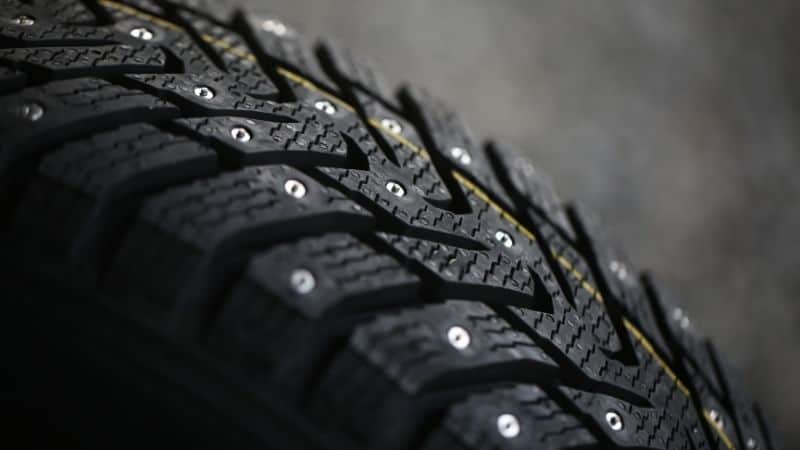 If you consider yourself an expert, this comes down to the cost of acquiring the tools.

Tire studs are usually sold in packs of 100, ranging from $10 to about $50 depending on size and build material.

To fit them onto the tire, you would need a stun gun or drill – the latter is best for screw studs – both of which cost a few hundred dollars each.

If you’re not experienced enough with this, it’s best to seek professional services in order to avoid causing potentially fatal damage such as accidentally puncturing the tire.

Most auto shops will stud your tires for $15 per tire, and this covers the whole process, including labor and materials.

How Long Do Studs On Tires Last?

How long studded tires last depends on factors such as how often they’re used, what conditions they’re used in, the weight of the vehicle, etc.

Most industry professionals and manufacturers, however, recommend that you swap out your studded tires every four seasons.

Can You Take Studs Out Of Tires?

It is possible to remove studs from your tires right at home using lubricant and a set of pliers, but only after unmounting the wheels from the vehicle first.

Lubing up the studs beforehand ensures that they pop out smoothly without rupturing the surface and causing a puncture.

You should use the same lubricant you use when mounting the wheels so you don’t end up with something that affects the rubber.

A good set of pliers should be used to grab the top of each stud and gently twisting it out instead of pulling.

Is It Safe To Remove Studs From Tires? 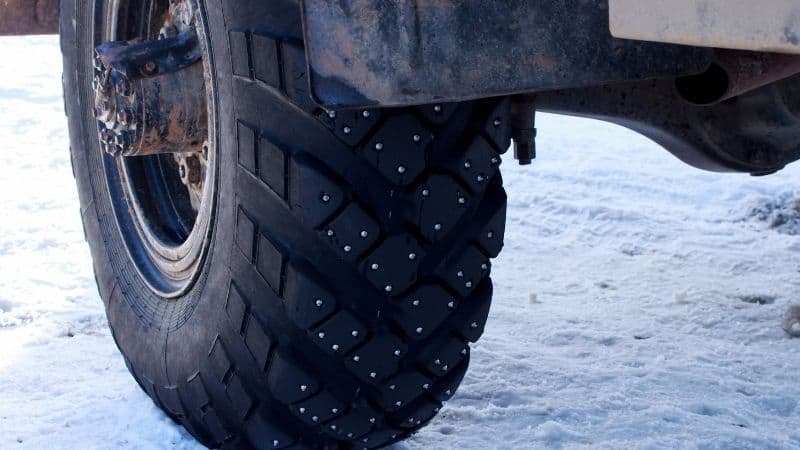 While it is safe to remove studs from tires, a lot of care should be applied to the process and, in most cases, should be left to a professional.

For starters, after removing studs, make sure you check for punctures. Each tire could carry up to 100 studs, so ensure you’re thorough during this step.

Tires whose studs have been removed don’t tend to last as long, especially if they’re winter tires that aren’t adapted for use outside of very low temperatures.

To avoid any unforeseen issues that could result from this process, it is best that you keep the studs on the tires and instead swap the tires themselves out.

This way, you can have a set of wheels for the different seasons and when winter rolls back around, all you have to do is install the dedicated set of wheels.

Can Tire Studs Be Replaced?

Tire studs can be replaced but, as discussed above, it’s not a recommended move. Keep one set of studs to one set of tires and only install the tires during the appropriate seasons to ensure you get the most use you can from them.

What Causes Tire Studs To Break Off?

Most of the tire studs available today have a stem made from steel or aluminum and a head made from tungsten to ensure they last as long as possible.

All these materials are highly durable, so if you find that they’re breaking off, it’s more than likely because they’ve been overused. In this case, they should be replaced as soon as possible to avoid motor accidents.

It could also indicate that they’ve been used on the wrong surfaces such as dry asphalt. Keep in mind that they’re meant primarily for icy roads and anything else that sacrifices control could put the driver and passengers in danger.

Tire studs are regulated by region, and it’s important that you check your local laws before installing them.

Most jurisdictions restrict their usage only to certain months within the winter. For example, in the U.S., only six states permit their use throughout the year (New Mexico, Wyoming, Colorado, Kentucky, New Hampshire and Vermont).

Other countries permit their use but with strict regulations of season and vehicle weight, including Denmark, Finland, Russia, France, Great Britain, Switzerland, Sweden and Turkey.

Some countries like Belgium, Poland, Portugal, Hungary, the Czech Republic and Luxembourg have outright banned their use.

Why Are Tire Studs Illegal In Some States? 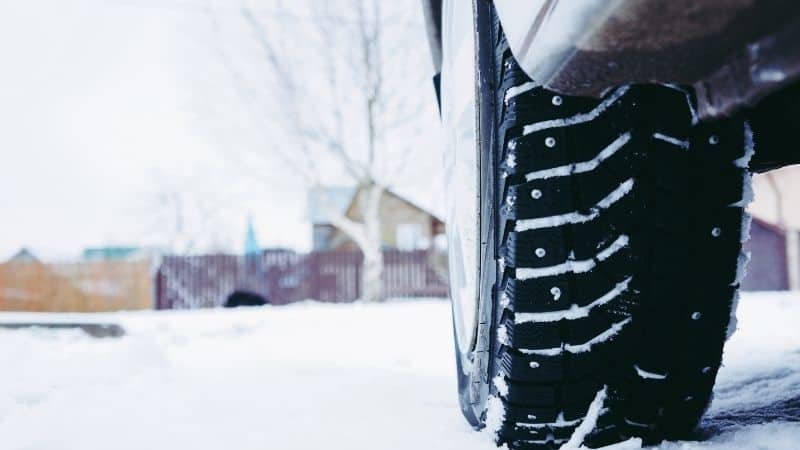 Due to how we’ve established they work, tire studs are known to cause damage to road surfaces outside of the winter.

Because of the damage they can cause to roads, tire studs are illegal in some states and countries.

Which Is Better Winter Tires Or Studded Tires?

This comes down to where you drive your vehicle during the winter. If your regular commute involves icy roads, studded tires could be a better choice for you.

Regular winter tires, however, are enough for most people who only need to drive over snowy roads.

Apart from the aforementioned loss of traction on non-icy roads, studded tires are also noticeably noisier than winter tires.

An icy path is the one place where studded tires get a chance to really prove their worth, and this includes black ice.

They break through it to give the vehicle better grip and traction where the tire’s rubber would be inadequate.

Can You Put Studded Tires On AWD?

Having an all-wheel-drive system could convince you that it’s enough year-round, but it’s better to be safe than sorry.

While AWD would provide more power than other systems, during more extreme conditions, traction would be harder to generate so winter or studded tires could come in handy.

Outside of these seasons, though, it’s probably a bad idea to keep the tires on the vehicle as the decreased traction puts a greater strain on the entire system.

What Size Tire Studs Do I Need?

When choosing studs for your tires, you should use a tire depth gauge to measure how much tread you have.

If you already know how to take readings from a gauge, finding the right stud size is as easy as getting one whose number corresponds to the first part of the reading.

Can You Drive Studdable Tires Without Studs?

Some winter tires can be studded but it’s possible to use them without installing the studs beforehand.

If you are looking to know more, you can also see our posts on what are tire socks, which tires do you put chains on, and how long do winter tires last.

Tire studs provide better grip and traction on icy roads during the winter and they also work on black ice.

However, they should be used with caution and you have to look carefully into them before making your choice.

They’re best suited for use on roads that have been impacted by harsh weather conditions but could potentially be dangerous on regular snow, wet roads or dry asphalt.

Removal and replacement are generally discouraged; you should have a dedicated set of tires for these seasons and you can expect to get four seasons’ worth of normal use before needing to get a new one.