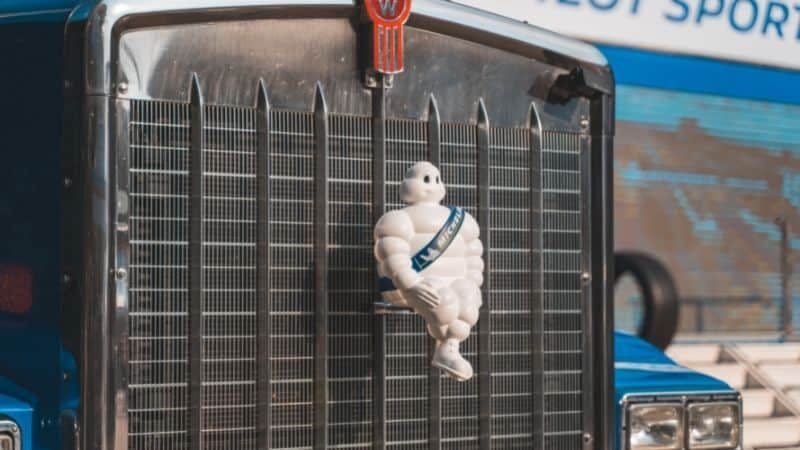 Whether you use the Michelin brand of tires or not, you are probably familiar with the popular Micheline tire mascot common in advertisements and events.

Therefore, you may wonder what the story is behind this mascot, also known as the Marshmallow Man? If you’d like to find out, keep reading to see what I learned!

What Is The Tire Marshmallow Man?

The Michelin tire company has a unique brand logo, commonly referred to as the Michelin Man, Marshmallow Man, or Bibendum in French. Introduced in 1894, this is the company’s official mascot that appears like a humanoid figure made of stacked white tires and looks like a pile of marshmallows. It’s one of the oldest trademarks still in use.

To learn more about the tire Marshmallow Man, his origin, the history and evolution, and some fascinating facts about this mascot, keep on reading for more interesting information!

What Is The History Of The Michelin Tires Mascot?

With a history spanning more than 100 years, the Michelin Man has been the face of Michelin tires since 1898. This white mascot is called Bibendum or Bib, which translates to “Michelin Man” in English.

In 1894, the Michelin founding brothers, Édouard and André, got inspired to develop the unique logo after noticing a stack of tires at the auto industry show in Lyon, France.

Over the years, however, the Michelin Man has undergone different changes, which are stated later in this article.

Why Is The Michelin Man Named Bibendum? 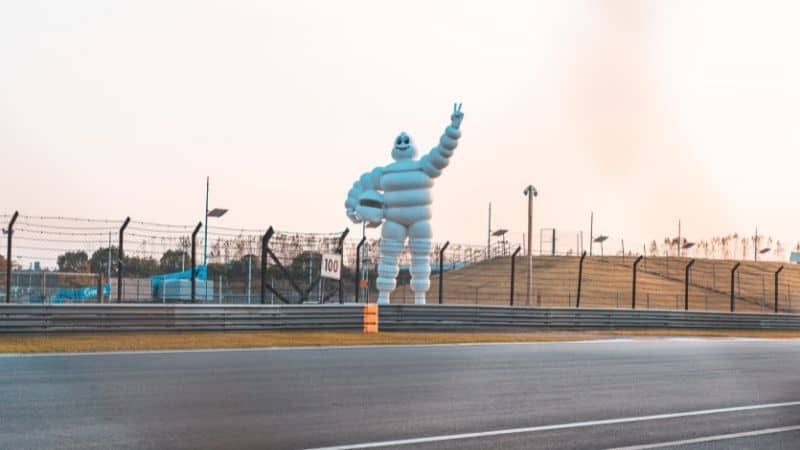 While most people know the mascot as Michelin Man, the actual name is Bibendum or Bib, which came from the slogan “Nunc est Bibendum” by the poet Horace’s Odes, Latin for Now it is time to drink.

Talented poster artist O’Galop sketched this logo on a rejected poster for a Munich brewery. With this creation, he replaced the bearded giant with a man made of a pile of tires holding a cup with broken glass and nails.

This imagery was used to show that Michelin tires were tough and hardy and that they didn’t puncture that easily.

Did The Michelin Man Always Look The Same?

Since the original sketch, the Michelin Man has undergone different changes. In the early days, Bibendum was depicted as a large, sinister figure who smoked a cigar and drank beer. This was to appeal to the wealthy upper-class demographic who had money to buy a car.

However, by the 1920s, he toned down and had a more refined and family-friendly image. Over the years, he has stopped smoking, shed weight and softened his image.

Why Is The Michelin Man White?

Originally, tires were off-white or grey-white because of the color of the rubber formula. During this period, tire manufacturers added zinc oxide to the formula, which gave the tires a brighter appearance.

White tires were not a symbol of status, rather, it was a general aesthetic. However, in today’s world, whitewall tires are primarily found on classic cars.

However, years later, manufacturers started adding carbon black to the formula to enhance the tire’s lifespan and alter the rubber’s chemical structure. Initially, this was added on the tread, which gave rise to whitewall tires.

Tires with black carbon could last more and have better performance than the white ones due to the improved chemical structure.

Read More:  How To Soften Tires? (All You Need To Know)

Eventually, carbon black was used in the production of the entire tire, which is now completely black.

So, why is the Michelin mascot white? When Michelin started out, tires were composed of their original materials and were white. This is why the original mascot was white and has remained the same ever since.

Is The Michelin Star Related To Michelin Man? 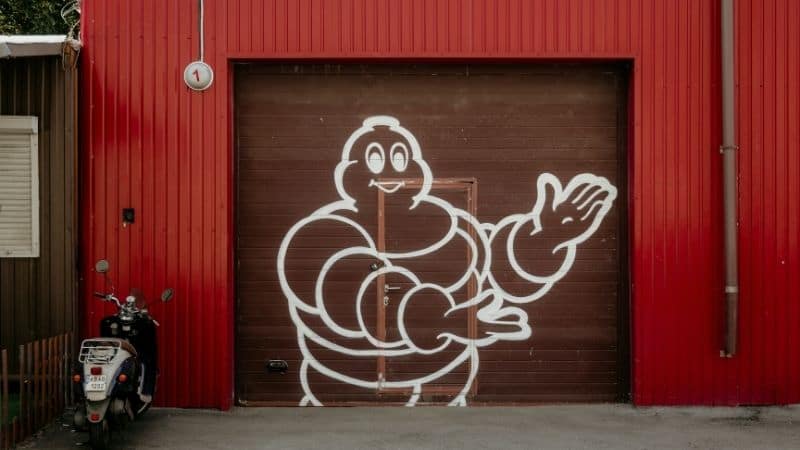 How is Michelin star related to Michelin tires? This is a common question for most people. Although the two are in different industries, they are related because they were introduced by the same company. Here’s how:

In the 1900s, there were about 2,200 cars in France, so the Michelin brothers decided to publish a guide for French motorists known as the Michelin Guide.

This guide included useful information to motorists, including maps, gas stations, hotels, car mechanic listings, and tire repair and replacement instructions. After a few years, they expanded and introduced guides to other countries such as Belgium and Germany.

In 1926, the guide expanded to cover fine dining establishments, and the three-star rating system was introduced five years later.

This Michelin Guide is now revered as the ultimate rating by food critics. With the Guide’s introduction, the tire company became the world’s fine dining authority until today.

As the Michelin ambassador, the Michelin Man is also used on the Michelin Guide logo and imagery. This mascot is used as the universal representative of all things Michelin, which has been important for the brand’s image.

What Are Some Interesting Facts About The Michelin Man?

Here are some fascinating facts about Bibendum that you should know:

1. There’s Furniture Fashioned In His Image

His puffy image inspired creator Eileen Gray to design the Bibendum Chair, which is recognized as one of the most distinctive designs of the 20th century.

This Bibendum Chair has two semi-circular padded tubes that are encased in soft, black leather. These chairs are quite popular and go for about $3,000 – $5,000.

2. There’s A London Restaurant That Pays Homage To Him

This restaurant was located in Michelin House, which served as the company headquarters from 1911 to 1985.

3. He Was Named Icon Of the Millenium

In 2018, the Michelin Man was named the Icon of the Millennium by Advertising Week. Having been in existence for more than 120 years, it’s one of the oldest trademarks that has made the Michelin brand recognizable.

As a trademark, the Michelin Man has also helped Michelin improve its rankings worldwide as a reputable organization.

To learn more, you can also see our posts on how long do Michelin tires last, what is the tire marshmallow man, what to do if someone stole your tires, the 10 biggest tires in the world, and American tire companies.

Michelin tires have been in existence for decades. Their brand has been quite recognizable, thanks to the mascot Bibendum, also known as the Michelin Man.

Introduced in 1894, this is one of the oldest trademarks and has maintained Michelin’s reputation as a top brand. Since the original illustration, the Michelin Man has evolved significantly and softened the image to become family-friendly.