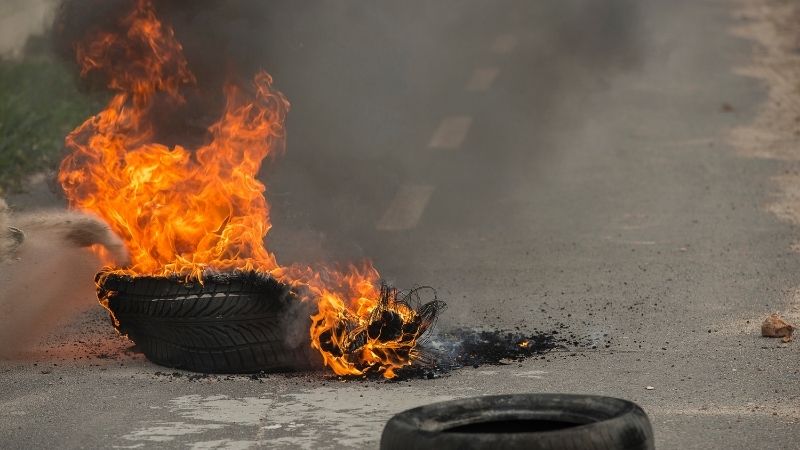 Once you are with your old set of tires or need to get some new ones, you might be wondering what the best way to dispose of them is.

While most people will keep them in the garage or trade them in for disposal and recycling, some of the tires end up in a tire-burning disposal facility. But how toxic is this smoke from burning tires? Here’s what you need to know.

Tire smoke is toxic and poses a risk to human beings and the environment. Since tires are made primarily of rubber, they release harmful chemicals and contaminants into the air during combustion. Workers that are constantly exposed to this smoke develop respiratory problems in the long run, such as lung infection, which could become fatal if one is not cautious.

To learn more about how tire smoke is toxic, what are the health impacts of inhaling the smoke, and whether it’s legal to burn tires, keep on reading!

Is Tire Smoke Lethal to Humans?

As mentioned above, tire smoke is deadly to the human body and the environment; therefore, it should be avoided.

Rubber is the primary raw material used in manufacturing tires; hence when the tires are burning, most of the chemicals produced are from the rubber, while the rest are from the steel belt, black carbon, and other trace elements.

Burning of rubber materials creates poisonous fumes, which can have damaging health effects for people with other underlying conditions, especially asthmatic individuals or heart conditions.

Read More:  Can You Change Tires Without A Jack? (Yes, Here's How)

When tires are burned, they generate particle pollution, which is a mixture of liquid droplets and small particles that include acids, metals, dust particles, and organic chemicals.

Tires also have sulfur which is added to the tire to give strength to it; therefore, when it’s burning, it will also emit harmful chemicals from this compound.

Once the smoke is emitted, it starts affecting people who have inhaled it and can become extremely dangerous for individuals with chronic conditions.

How Long Does It Take For The Tire Smoke To Affect You? 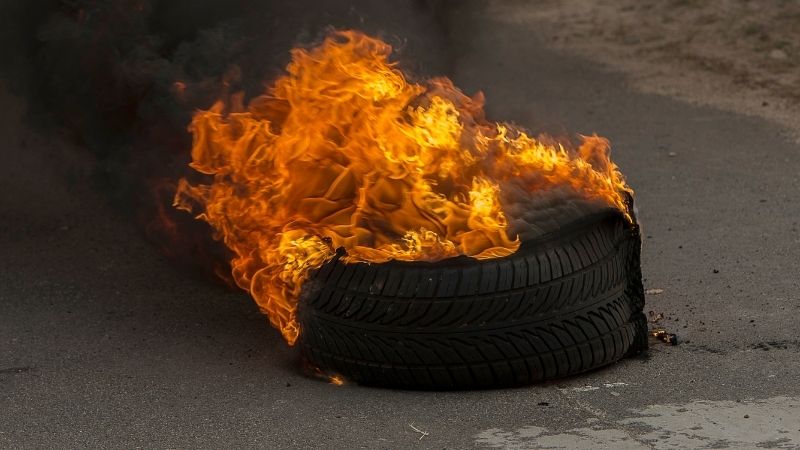 Tire fires are notorious for burning for very long periods, which also makes them hard to extinguish. This is because they have hydrocarbons in their material.

If the tires burn for longer, the amount of smoke produced will also be high, depending on the temperature, wind patterns, humidity, and other factors.

Some of the longest tire fires in history took decades to put out, which means that they caused a lot of air pollution with the release of harmful chemicals.

While some drivers report experiencing symptoms soon after inhaling tire smoke, it worsens if left untreated for long.

Smoke inhalation from burning rubber could exhibit some mild symptoms if you were briefly exposed. However, if you are exposed for longer and with greater intensity, the health problems could worsen much faster.

What Are The Health Impacts Of Inhaling Tire Smoke?

Open tire fire emissions include criteria and non-criteria pollutants which are both a danger to public health.

Keep in mind that if this is not treated on time, the smoke from burning tires may cause permanent damage to the lungs, which could become lifetime breathing issues.

What’s worse, your lungs run the risk of becoming swollen, infected, and filled with fluid. When the lungs have fluid, you will start experiencing shortness of breath and eventually lead to respiratory failure and permanent lung damage.

These chemicals could also lead to skin irritation, eye irritation, central nervous system depression, and cancer, depending on the length of exposure.

For communities living in areas with tire burning, the smoke becomes harmful to the children and breastfeeding mothers because a nursing mother can transfer the pollutants to the child via breast milk.

What To Do When Exposed To Tire Smoke? 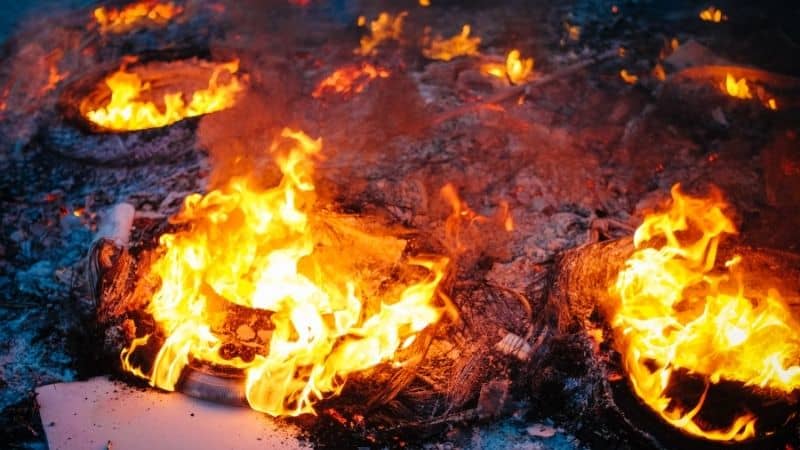 According to a fact sheet, if you were exposed to high levels of smoke from tire burning, the breathing difficulties could develop in about 36 hours; therefore, you should seek medical help immediately.

If you inhale this smoke and you don’t have any severe medical conditions, you’ll experience eye, nose, or throat irritation which should disappear after the fire has been put off. However, if this persists, seek medical advice.

Therefore, once you get exposed to the thick black tire smoke, you should take time to observe how your body reacts, especially if you have any underlying conditions that increase your risk.

However, if you have pre-existing respiratory issues, you should consult your doctor as soon as possible to avoid further complications.

To know more, you can also see our posts on how are tires recycled, why are tires made of rubber, and if you can sell used tires.

Most state laws prohibit the burning of tires because of the health and environmental effects that come with it.

Tire smoke is toxic to humans and the environment because of the chemicals emitted when the tire is burning.

Tires are primarily made of rubber which contains harmful contaminants that could lead to chronic respiratory diseases that can be fatal if left untreated.

Once you get exposed to tire smoke, either at work or in a protest, you’ll develop some mild symptoms such as eye and throat irritation; however, the longer you are exposed, the greater the risk of developing chronic respiratory infections.