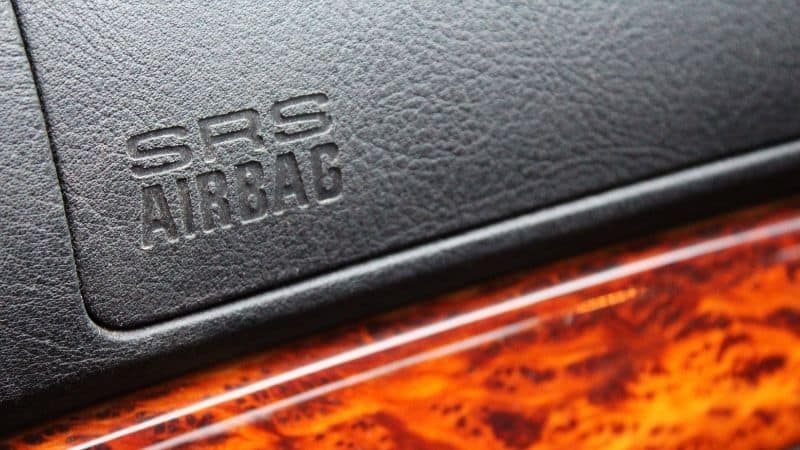 Airbags have to work faster than the time it takes for a direct impact to your vehicle to cause damage, meaning they need to deploy fast.

However, how fast do airbags deploy? If you’d like to find out, keep reading this article to see what I found out on this topic!

How Fast Do Airbags Deploy?

Airbags deploy quite fast, inflating and coming out between 20 and 50 milliseconds at 100 to 200 mph (about 161 to 322 km/hr). This process happens faster than the blink of an eye and works by creating an explosion within the bags because they need to be up before the worst part of the crash takes place.

Read more to learn about airbag speeds, including how and why they deploy so fast, the effects this has, and more useful facts and tips!

Why Do Airbags Come Out So Fast?

Airbags come out fast because they have to kick in before the effects of a direct collision have a chance to affect the vehicle’s occupants.

A crash happens very fast and is over in an instant, but a lot happens in that time, and crash engineers have divided it into three stages: initial contact, maximum engagement, and separation.

During the initial contact, the vehicles touch at the point of impact.

This develops into the maximum engagement stage which is where most of the damage occurs, and it’s where the passengers are likely to be injured.

Separation is the moment where the vehicles decouple as they move into their positions of final rest, but by this time, the damage has been done.

Read More:  Why Didn't My Airbags Deploy? (7 Reasons Why)

This all happens in 70 to 150 milliseconds, meaning that an airbag would need to be deployed faster than that.

Moreover, an airbag would be virtually useless if it deployed after the second stage (i.e. maximum engagement), so it has to be incredibly fast so that it deploys right at the moment of initial contact.

How Do Airbags Deploy So Fast?

As discussed above, you would need something that reacts fast in order to be ready to address the effects of the impact as soon as possible.

An airbag needs to be inflated to work, but normal inflation wouldn’t suffice considering how fast it needs to be up.

For this reason, airbags inflate by a small chemical explosion that fills the bag up with gas almost instantaneously.

Manufacturers usually use chemicals that will ignite and release nitrogen in the resulting explosion when they burn.

This explosion is triggered by a sensor that detects any significant and sudden drops in the car’s speed, which is what happens during a collision.

Nitrogen is preferred because it forms fast enough during the chemical explosion and it doesn’t react with most substances, meaning it would be stable inside the airbag once released.

How Hard Do Airbags Hit You? 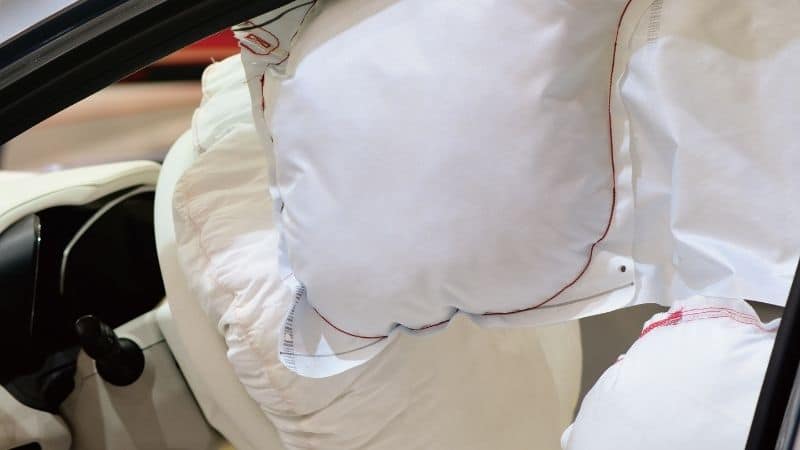 Airbags will hit you incredibly hard because they deploy at between 100 and 200 miles per hour, and anything moving that fast is likely to hurt you regardless of what material it’s made of.

Can Airbags Injure You?

Airbags deploy at very high speeds, so if it hits you in the process, it has the ability to cause serious injury.

Read More:  Do Trucks Have Airbags? (All You Need To Know)

Injuries that you could sustain when it hits you at these speeds will vary in severity depending on how close you’re sitting to it.

You can reduce the chances of being hurt by it as it deploys by sitting in a way that puts some distance between you and where it deploys from.

For example, if you’re in the driver’s seat, sit further back from the steering wheel if your height allows it. This way, in the event of a collision, the airbag will not hit you as it deploys but you will instead hit it at a relatively slower speed after it’s already inflated.

Due to inertia, you’ll hit the airbag at the speed that the car was moving at before the crash, which we hope is less than 200 mph, as opposed to the airbag itself hitting you at its own high speed of inflation.

What Injuries Can You Get From An Airbag?

Injuries resulting from an airbag can be caused by it hitting you as it inflates, but they can also come from you smacking into it from inertia if you were traveling fast enough before the collision.

Making contact with an airbag at high speeds in either scenario could exert enough force on your body to break the bones that are impacted.

Your face/head is the most likely body part to sustain injuries related to airbags because they’re meant to keep you from flying through the windshield or hitting the steering wheel/dashboard headfirst.

Read More:  Can Airbags Be Reused? (All You Need To Know)

Moreover, the high speeds at which airbags deploy mean that they create a lot of friction and this could cause burns if the fabric makes direct contact with your skin at the wrong time.

Can An Airbag Kill You?

An airbag could kill an adult if they’re sitting too close to it when it deploys, but it’s rare for something like this to happen.

Rather, death is more likely to occur when the passenger has something between them and the airbag (i.e a cellphone).

If you’re dealing with a child or other vulnerable person, though, the likelihood of fatality from airbag deployment is higher.

This is why it’s recommended that you don’t have children in the front seat, even if and especially when they’re in a car seat, because the high speed of the airbag’s deployment could pose a risk.

To learn more about airbags, you can also read our posts on whether airbags can be replaced, airbag statistics, facts & trends, and if airbags save lives.

A sensor that detects rapid and substantial drops in the vehicle’s speed as is normal during a collision sets off an explosion that fills up the airbag with gas faster than other methods of inflation.