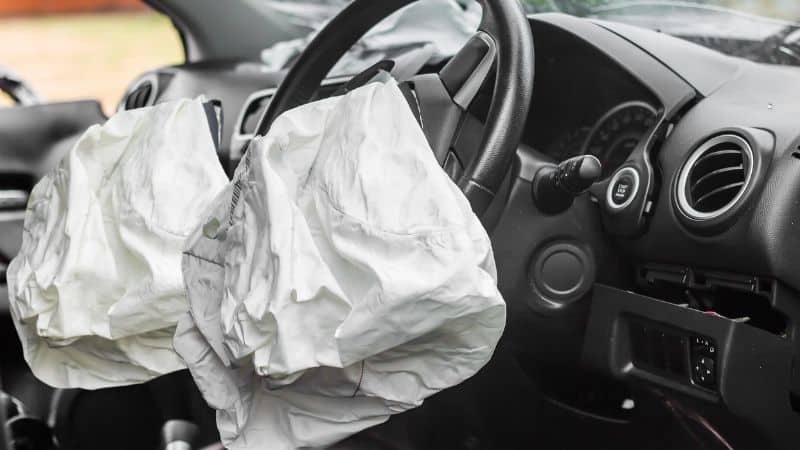 Airbags are a common feature in modern vehicles, and are legally required in most cases. For this reason, you may be wondering exactly how safe these airbags are. If so, keep reading for facts and statistics surrounding this safety feature!

According to statistics collected in 2017, 50,457 lives have been saved by frontal airbags alone. As side airbags have become more popular, they are beginning to ramp up the number of people they’ve saved as well. Airbags can reduce the chance of death by around 32% in many cases.

If you’d like to learn more facts, statistics and trends about airbags, keep reading this article for more facts and tips!

1. Cars have gotten approximately 56% safer, thanks partially to airbags.

Overall, cars have gotten about 56% safer from the 1960s to the present. This is true even when you account for the differences in road quality, the lengths of time spent in cars, and the quality of life-saving medication.

In part, this is due to airbags, as well as to crash-avoidance technology, like collision warnings. Seatbelts and similar safety features are also involved.

Similarly to the previous statistic, this includes airbags. However, advanced collision-avoidance technology and seatbelts are also included. In many cases, it was a combination of technology that saved these lives.

3. All safety features lower fatalities by about 56%.

If cars had continued to only incorporate the level of safety available in 1955, then there would be many more deaths. In particular, the rate would increase by 56%. Of course, airbags do play a large role in this, though this statistic also includes other factors.

As the most recent data available, this statistic is currently the most accurate, and it’s likely that the use of restraints saves a similar number of lives each year.

Read More:  Do Airbags Save Lives? (All You Need To Know)

5. Airbags reduce fatalities by 14% when no seat belt is used. 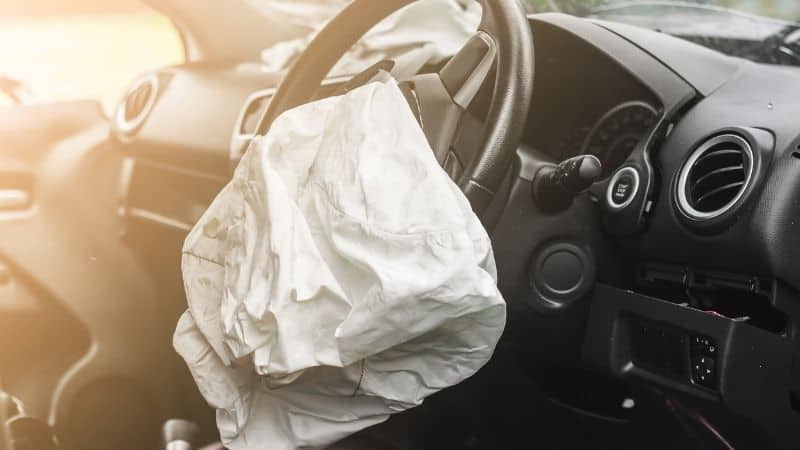 If the occupant does not have a seat belt on, the airbag alone can decrease their chance of death by 14%.

6. Airbags reduce fatalities by a further 11% when used with a seatbelt.

Seatbelts lower the chance of death by themselves, but when you combine them with an airbag, the risk of death goes down by another 11%. In the end, this puts your risk of death much lower.

Airbags are considered supplemental forms of safety, and are designed to be used alongside a seatbelt. Therefore, they work best when you’re wearing your seatbelt.

They are also not designed to deploy in all crashes, so they will not help during minor crashes. If the force is not extensive enough, they do not deploy.

It’s important to understand that side airbags are not standard, so because fewer vehicles have side airbags, it’s reasonable to see why the survival rate for these airbags is lower.

Still, considering that side airbags aren’t legally required, they have managed to prevent many deaths over the years.

8. Side airbags reduce a driver’s risk of death by 37% in side crashes.

If a car crashes into the driver’s side, side airbags can reduce the driver’s chance of death by 37%. This is substantial and an apparent reason to choose a car with side airbags in them. Otherwise, your risk of death due from a side crash goes up quite a bit.

9. Side airbags reduce the driver’s risk of death by 52%.

When installed on SUVs, these side airbags can reduce the driver’s risk of death by over half. Therefore, they’re significant for SUV collisions.

10. Side airbags reduce injuries in driver-side crashes by 41%.

This particular study took place in Australia and utilized side airbags that had both head and torso protection. Drivers were much less likely to be injured seriously than they were without the side airbags.

Read More:  What Does The Airbag Clock Spring Do? (Your Complete Guide)

11. The NHTSA found that curtain airbags and torso airbags together reduced the risk of death by 31%.

These statistics were developed with crashes near the occupant – so passenger-side crashes for passengers and driver-side crashers for drivers.

12. For combination airbags that protect both the head and torso, the risk dropped by 25%, according to the NHTSA.

If airbags that combined both head and torso protection are used, they reduce the risk of fatalities by 25%, which is slightly lower than curtain airbags and torso airbags used together.

13. In cars where only torso or curtain airbags were used, the reduction of death was much smaller.

Specifically, curtain airbags alone reduced death by 16%, while a torso airbag reduced it by 8%. While these rates are not as high as combination airbags, they’re still significant, as airbags don’t put you at greater risk of death or injury.

14. Airbags usually inflate in only 10-20 milliseconds. 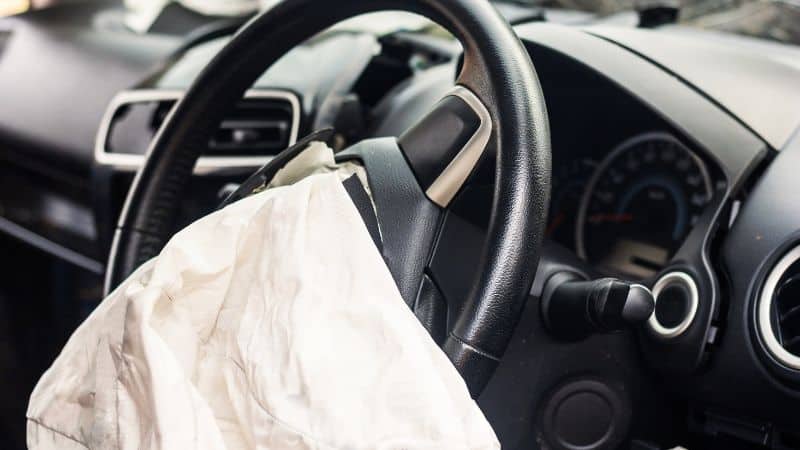 During a rollover crash, it takes only 10-20 milliseconds for an airbag to inflate. However, it does take them a bit longer for older airbags. There are different types of airbags, and they all have different inflation times.

Currently, side airbags are very unregulated, so they vary the most.

Usually, these deaths are in low-speed crashes, took place in cars made before 1998, and the fatality was usually that of the passenger(s).

16. People who were not adequately restrained make up 80% of these deaths.

Most airbag deaths were caused when the passenger was not properly restrained. Again, the airbag is designed to work with the seatbelt, and without the seatbelt, injuries caused by the airbag will be more common.

17. Statistically, several issues can increase the odds of injury via airbag.

Short and older drivers are more likely to be injured by airbags, for instance—those who sit closer to the steering wheel and those vulnerable to injuries.

Read More:  Pros And Cons Of Airbags (6 Things You Should Know)

18. There is no greater risk of injury in those under 15 when it comes to side airbags.

In regard to side airbags, there is no greater risk of injuries for children. Therefore, they can be placed in the backseat safely.

19. The Takata airbag recall was the largest recall in U.S. history.

This recall involved over 70 million vehicles that were recalled by 2019. These airbags caused 15 confirmed deaths after they exploded and sent shrapnel throughout the cabin.

Sunroof airbags are becoming increasingly common, as ejections through the roof are not terribly uncommon. They do occur, so airbags in that region are important.

21. The necessary speed to deploy the airbag varies.

The exact speed needed to deploy an airbag varies. Some deploy as low as eight mph for narrow object crashes, like a tree or pole, while others require closer to 18 mph.

22. Vehicles after 2014 statistically have side airbags.

Because of new regulations, nearly every vehicle produced after 2014 utilizes a side airbag.

23. The number of kids killed by airbags is increasing. 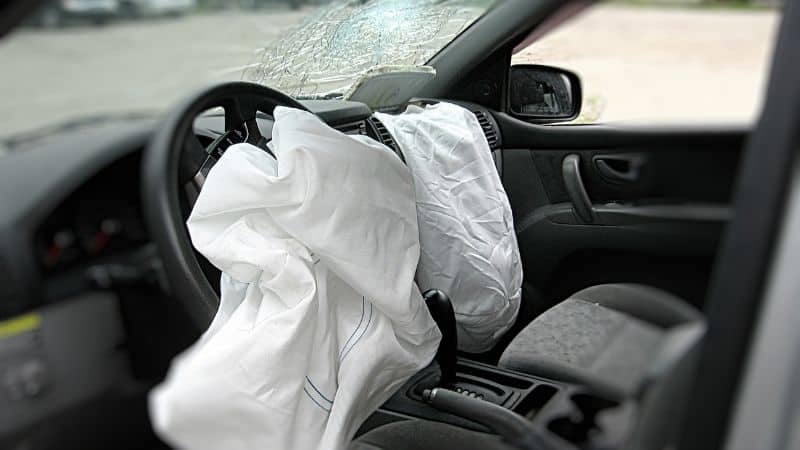 Airbags are not made for children, as they are too short. Therefore, children should be in the backseat, as airbags can cause fatalities when they hit small children.

Airbags deploy very quickly, as is necessary if they’re to stop the passenger from jerking forward.

To know more, you can also see our posts on how fast do airbags deploy, if airbags can deploy when the car is off, and at what speed do airbags deploy. Also, you can view our homepage for more automotive information.

Airbags continue to save people, and with the invention of side airbags and other types of airbags, cars have become much safer. To put it in perspective, the lives saved by these airbags are easily above 60,000.