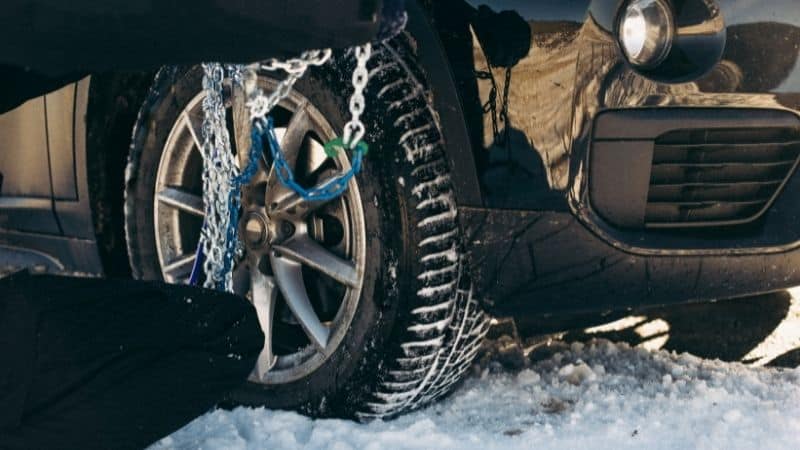 Tire chains are a life-saver when driving in harsh snowy conditions, but just how effective are they in different winter conditions?

If you’re looking to learn about their applications, installation, alternatives, legality, costs, and more, read on.

Do Tire Chains Work On Ice?

Tire chains allow you to drive on snowy and icy roads by generating traction and reducing wheel spin for better control. They dig into the snow or ice to get to the pavement beneath to give the vehicle better grip and generate stronger traction. This also gets around the problem regular tires would have where they spin out in ice because the force delivered to the tread is more than the friction generated from the contact they have with the road.

For more on tire chains, including their effectiveness on black ice, snow chains vs studded tires, and more, continue reading!

Unlike snow or regular ice on roads, black ice is much harder so tire chains wouldn’t be as effective when driving on it.

We’ve established that snow chains work by digging into the surface to get to the pavement below or just increase the tire’s area of contact, but this is harder to achieve on black ice.

How Fast Can You Drive With Snow Chains? 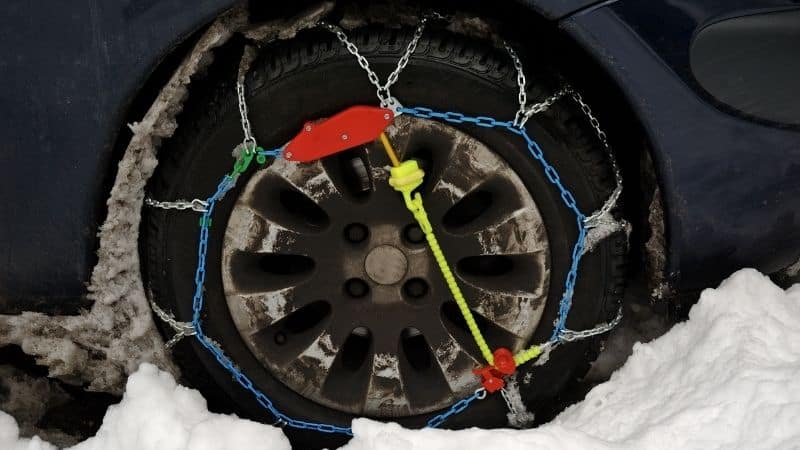 This low speed is for the better because if you were to hit an unexpected patch of dry pavement, you would lose control because chains aren’t meant for that kind of surface so it’s better to have this happen at slower speeds.

Read More:  What Are Beadlock Wheels? (+ Other Common FAQs)

Do I Need Chains If I Have Snow Tires?

This depends on if where you’re driving gets a thick enough layer of compacted snow.

If it isn’t thick enough, snow tires are sufficient because snow chains would actually decrease your traction under these conditions.

However, you should keep a set of tire chains handy during winter so you’re better prepared in the event of a blizzard.

Tire chains come in sets of two and this is often good enough for most people’s needs.

Should I Put Snow Chains On All 4 Tires?

Having chains on all four tires could provide you with much better handling and stability as all tires will have equivalent traction.

However, having chains on all four tires is prohibited by some manufacturers as well as some local laws, so be sure to check beforehand.

You don’t have to put chains on all 4 tires, just 2 could work. Deciding which two to chain is something we’ll discuss further below.

Do You Need 4 Chains For AWD?

AWD vehicles are usually good at generating traction but when they’re driving on snow, this ability is reduced so you have to install snow chains in some situations.

If your manufacturer doesn’t discourage it, having chains on all four tires could provide better handling but you could operate in stable enough conditions with just two, whose ideal placement is discussed below.

Do You Put Snow Chains On Front Or Back Tires? 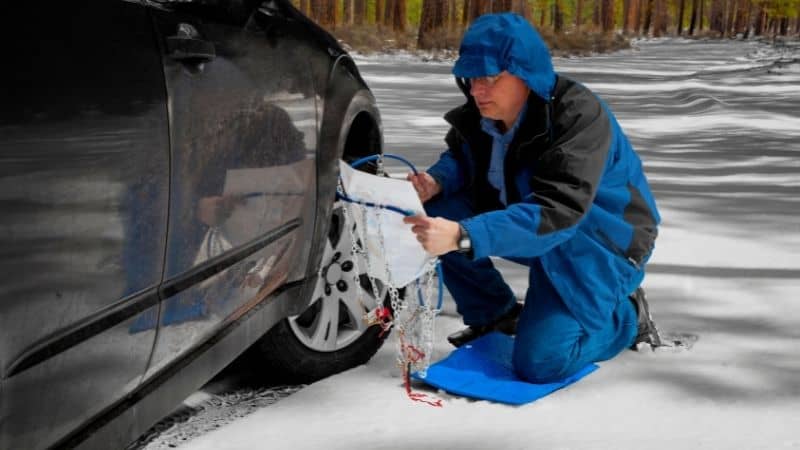 A good rule of thumb is to install snow chains to the tires that are used to generate traction – if your car is an RWD, install them in the rear and vice versa.

Read More:  How Long Do Tires Last In Storage? (Do They Go Bad, How To Store + More)

When it comes to an AWD or 4×4 and you only have two chains, you should install them in the front to give yourself better steering as well.

This also works because the vehicle’s weight shifts to the front when you brake so you want it as stable as possible.

How Much Does It Cost To Put Chains On Tires?

You can put tire chains on your car yourself but if you can’t it’s going to cost you $30 to install and $15 to take them off.

Standard tire chains that are less durable cost $40 while high-end ones meant for heavier loads cost upwards of $100.

Do AutoSocks Count As Chains?

In some U.S. States, AutoSocks have been legally recognized as an alternative traction device to snow chains, but they’re not the same thing.

This distinction is important in places like California where the law acknowledging them states that their use could be prohibited in conditions where snow chains are specifically mandated.

Why Are Snow Chains Illegal?

Snow chains’ usage is regulated heavily in many places, where they’re often a legal requirement during certain weather conditions and seasons.

However, its use is also illegal during certain times of the year because they cause damage when driven on dry pavement as is the case during most non-winter months.

Is It Hard To Put Chains On Tires? 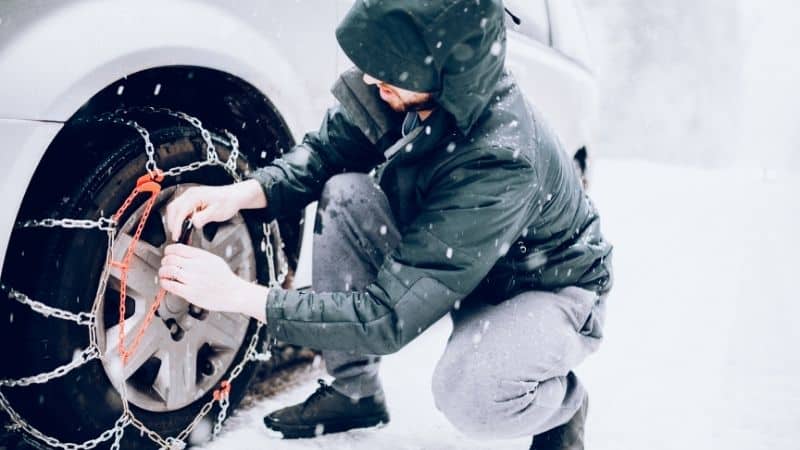 Installing a snow chain is as easy as wrapping it around the tire, driving forward a little, then locking it in place.

This may be more difficult to do in a situation like a blizzard, so it’s best that you install the tire before you start driving.

Can You Use Chains On Studded Tires?

You can pair studded tires and chains in situations where you need more traction, and snow chain mandates often demand that you do so regardless because it helps.

To know more about tires, you can also see our posts if tires chains work, what are tire socks, tire chains vs cables, and how long do winter tires last.

Tire chains make a big difference in snow and regular ice in generating traction for your vehicle, but don’t work as effectively on black ice.

You can’t drive at high speeds with them installed – you can only get about 30 mph (about 48 km/h) – but this is ideal for safety in case you hit a dry patch of road.

2 chains could work, but they’d have to be placed on the tires that are used to generate traction, i.e. the front wheels on an FWD and vice versa.

In an AWD where you only have two chains, you should install them in the front for better steering on top of traction.

Snow chains are a legal requirement in most places during the winter but are usually illegal outside of that season because they damage the pavement.