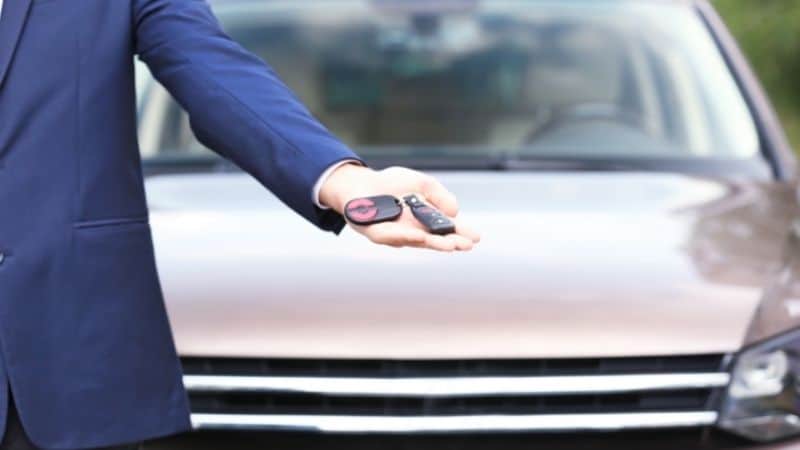 Car alarms go off when the sensors are triggered by motion or movement around the vehicle.

However, your car alarm can keep going off for no apparent reason in some situations, which can be quite frustrating.

Therefore, you may wonder why your alarm keeps going off. If you’d like to find out, keep reading to see what I learned!

What Do I Do if My Car Alarm Keeps Going Off?

Your car alarm will keep going off either due to a key fob malfunction, faulty sensors, low battery level, wiring problems, poorly installed alarm system, unevenly closed doors, or a faulty hood latch sensor. While most of these issues can be fixed with an ECU reset, you might also need professional services to fix the problem.

If you’d like to learn more about why your alarm keeps going off, listed below are 13 different reasons why and how to fix it!

13 Reasons Why Your Car Alarm Keeps Going Off

A car battery is critical for the function of your vehicle, including the alarm system. Therefore, if your battery has a low charge or is dead, you might notice that the alarm goes off fairly often.

Your car alarm might be the first indicator that your battery is dying because it’s designed to alert you of these issues, and turning on the engine with a dying battery instantly sets the alarm off.

Therefore, if your car alarm goes off when starting the car, use a voltmeter to confirm whether the battery is the problem, and if the reading is below 12.6 volts, consider replacing it.

If the battery is corroded or the terminals are rusty, it might send the wrong signals to the alarm system, which triggers it and causes an electrical malfunction.

When you have rust on the terminals, the battery doesn’t have enough power to distribute to other parts of the car, causing your vehicle to read this as a low battery and consequently set off the alarm as a warning. 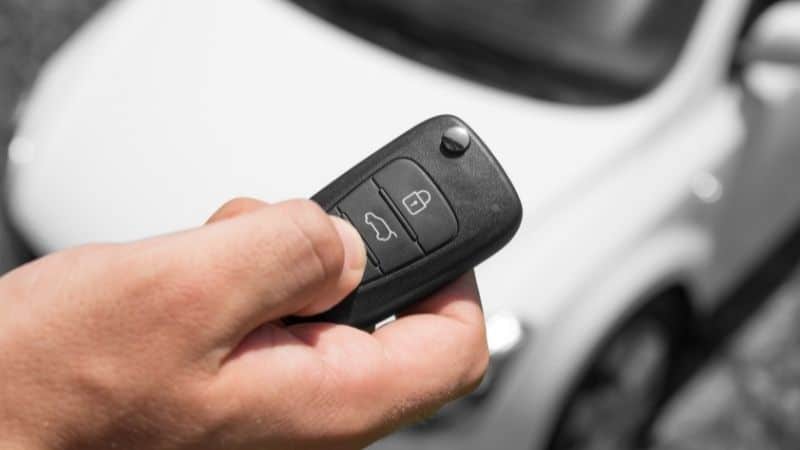 A key fob is a device used to unlock and lock the doors of your car. In modern vehicles, a fob is also used to start the engine when pushing a button. Using this device requires you to just press a button.

Read More:  Can Thieves Disable Car Alarms? (Not What You Think)

If you want to set off the alarm, you can also use the key fob because it contains a short-range radio transmitter that signals to the receiver unit within the vehicle.

However, when it’s faulty, it can’t send the signal to your vehicle, which can cause your alarm system to go off for no reason.

After years of use, the batteries in car key fobs go dead, which also causes the alarm to go off frequently. A malfunctioning key fob sends the incorrect signals and triggers the alarm; therefore, it should be replaced often.

In modern car models, the hood latch comes equipped with a sensor that triggers the alarm when someone tries to open the bonnet.

A properly working hood sensor will detect when the hood latch is open and illuminates a warning light on the dashboard. However, if the sensor is defective, the car alarm will go off.

Your hood latch sensor malfunctions due to dirt, dust, grime, and debris that collects and builds up around it. Since the sensor is around the engine bay, it’s highly prone to collecting these particles, which causes it to malfunction and set off the alarm.

Just like the hood latch sensor, the door lock sensors monitor the car and ensure that your doors are not opened.

These sensors are installed inside the door lock or externally. Therefore, they could trigger the alarm to go off when they’re faulty.

Finding these sensors might be challenging, especially if you don’t have enough information about your car. Therefore, use the owner’s manual or consult a professional to get these details.

Factory alarm systems will keep your car safe up to a certain level, and at some point, most car owners will get an aftermarket car alarm that’s more improved to align with their needs.

A downside of this, however, is that the aftermarket alarm system could be improperly installed, especially if you don’t take your car to a professional.

Therefore, if your car alarm keeps going off, it’s highly likely that it was incorrectly installed.

Therefore, if the ECU develops a problem, it will send false signals to the alarm system, which misleads the car into assuming that the vehicle has been compromised.

This problem can go undetected for a long time and keep triggering the car alarm randomly, meaning you should have your alarm checked right away when it begins acting up. 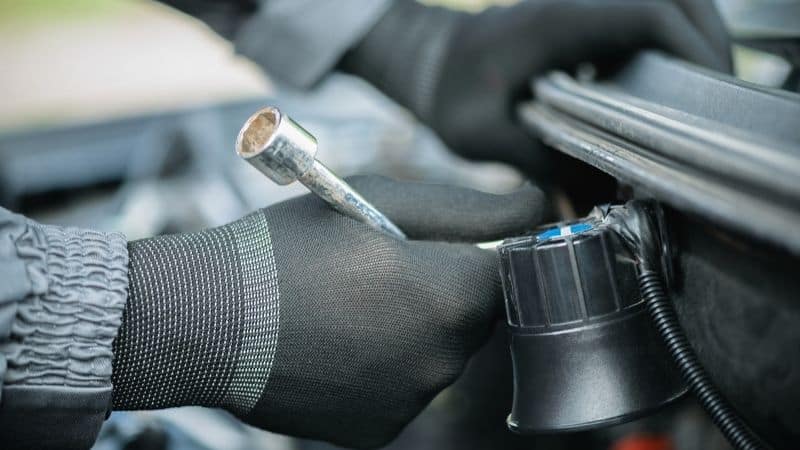 Your car has an electrical wiring system that connects all its components and keeps them functioning properly.

For instance, if your alarm sensors aren’t connected properly to the vehicle’s computer system, they will send the wrong signals and trigger the alarm.

Car alarm systems have different types of sensors depending on the car. While older models have about two sensors, newer models might have more.

Sensor sensitivity also differs. The older models have fixed settings, and the latest systems may be adjustable, so whether your car has two or five sensors, they are all linked together.

Therefore, if one of these sensors gets triggered, the alarm system will go off, and if some are more sensitive, your alarm will keep going off with every movement.

If you have cleaned and replaced your hood latch sensors and the alarm keeps going off, consider checking the connection, as a defective hood latch connection can trigger false alarms and initiate extra commands such as airbag deployment.

Your alarm could also be going off by accident, especially if you have a key fob in your pocket or your child or pet set it off by mistake.

If this keeps happening, check the key fob and ensure that it’s placed away from a place where it can get triggered easily.

If the alarm keeps going off, the entire alarm system might be damaged and need replacement.

Cars come with a manufacturer’s alarm system, but you can replace them with an aftermarket one if the original one is faulty.

13. Constant Movement Around The Vehicle

If your car has highly sensitive sensors, they will be triggered any time people pass near the vehicle or someone touches the car by accident.

Vehicles with these types of alarms will be activated more frequently, which can be irritating if your car is parked in your neighborhood.

How To Fix A Car Alarm That Keeps Going Off 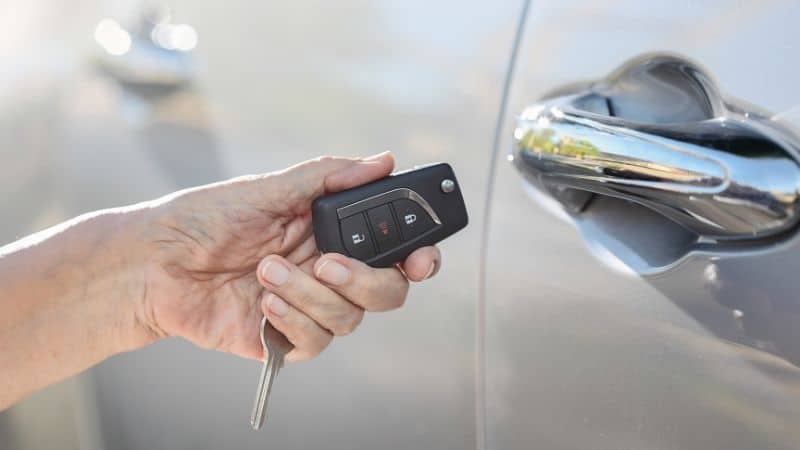 If you have an issue with your alarm going off, here are some of the steps you can take to fix it:

Read More:  Why Didn’t My Car Alarm Go Off? (List Of Reasons Why)

If the car battery is dying or has rusty terminals, you need to replace it immediately to stop the alarm system from going off.

However, if the battery is still in good condition, you can use chemical battery cleaners to clean the terminals and get your alarm system working properly.

2. Take The Car For Diagnosis

When sensors are damaged, most car drivers might not know the cause or know how to fix it. Therefore, in this case, if you suspect that the sensors are faulty, you should take your car to a professional mechanic to diagnose the problem and fix the sensors.

However, when taking your car to a mechanic, ensure that they are well qualified to handle this process to avoid issues with installation.

Your hood latch sensors get damaged due to dirt, grease, and debris because of their location next to the engine.

To avoid these problems, constantly check your hood latch and clean it. If you are unsure where it’s located, you can use the owner’s manual for direction.

If the key fob is damaged or needs a new battery, you need to replace it to ensure that your alarm stays off. Fortunately, fob batteries cost as low as $5 and can last for several years before replacement.

You need to adjust the settings for sensors that go off due to high sensitivity levels to prevent the alarm from going off too often. In order to find the settings, you can use the owner’s manual. However, if you can’t adjust them, you can replace them with less sensitive aftermarket sensors.

Car alarms that go off too frequently can be irritating to most people, which happens due to factors such as faulty sensors, damaged key fobs, low battery, and wiring problems. Once you identify the reason why your car alarm keeps going off, you can fix the issue and have your system working normally again.