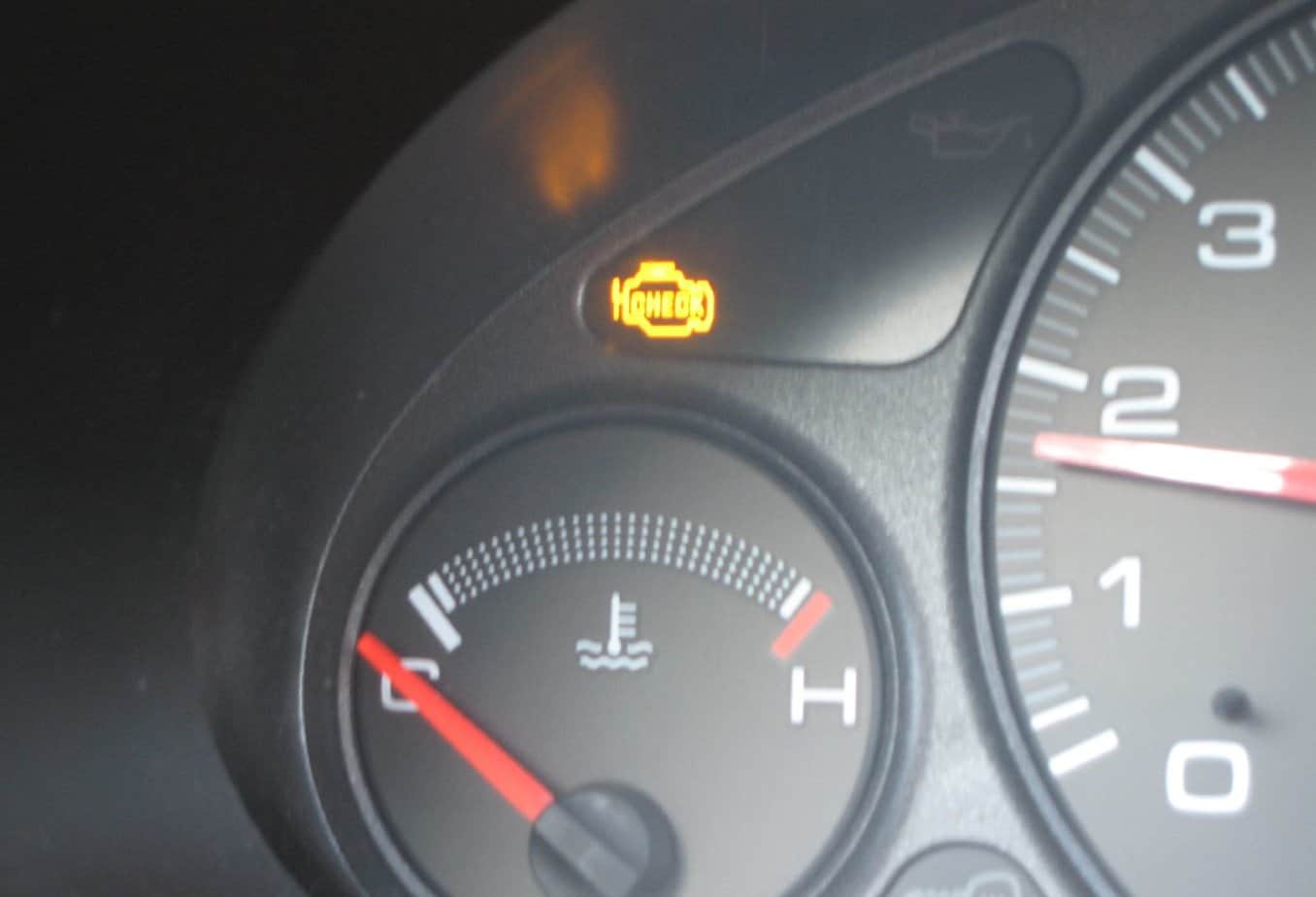 Your cars dashboard has various lights that alert you if your car needs something. Regarding your check engine light, it could mean that you have either a small or a big problem.

If you notice that your check engine light is on, you probably want to know what caused it. We looked up the facts, and here is what we learned about the matter!

Why Is My Check Engine Light On?

A gas cap or fuel filler cap keeps dust, debris, and dirt out of your cars fuel tank, but a loose or faulty gas cap can make your check engine light turn on.

Normally, a gas cap would cause your check engine light to illuminate if your gas cap is loose after you refill your fuel tank.

Usually, the check engine light appears because the gas cap’s vacuum seal was not applied since the gas cap was not properly placed.

Luckily, you can either reattach or replace the gas cap if it is cracked or has a broken seal.

Normally, you will be able to tell that the catalytic converter is your problem if you also smell something similar to rotten eggs when your check engine light is on.

Your car has an oxygen sensor that measures the amount of unburned oxygen in your exhaust to avoid damaging other parts of the engine.

With that, the oxygen sensor is crucial because once it knows how much oxygen is in the exhaust, adjustments will be made to keep the air-fuel ratio balanced.

If the oxygen sensors are faulty, your engine will not know how much oxygen is in the exhaust, causing the engine to perform poorly and damage other parts of the engine.

Similar to your oxygen sensor, your mass airflow sensor (MAF) measures how much air enters your engine to ensure enough oxygen is mixing with the fuel.

That said, there has to be enough oxygen and fuel in your engine to ensure enough power for your car.

If there is insufficient fuel or oxygen, your vehicle may refuse to start, making your check engine light appear.

As stated earlier, your engine needs a mixture of air and fuel to start, but spark plugs are also crucial to create combustion to give the engine’s cylinders power.

Read More:  Why Does My Truck Say Reduced Engine Power? (9 Reasons Why)

If the spark plugs are worn out, there will be no ignition, making your engine sputter and misfire while turning your check engine light on.

Also, frequent misfiring of the engine can increase the hydrocarbon emissions, making your engine perform poorly.

If you have an aftermarket alarm that was not properly installed, it could cause various issues in your car.

For instance, an improperly installed aftermarket alarm can keep your car from starting or drain your battery, making your check engine light turn on.

Luckily, you can either fix or reinstall your aftermarket alarm or have a new alarm installed to solve this issue.

Your car has an exhaust gas recirculation (EGR) system that reduces how much nitrogen oxide exits the cars engine to make the engine run better.

However, the exhaust gas recirculation valve can fail or become faulty, causing the nitrogen oxide to get stuck and illuminate the check engine light on your dashboard.

Every car contains a vacuum system that does various functions for your car, but having a vacuum leak could trigger your check engine light.

Usually, you would know that a vacuum leak is an issue if your car settles or surges while your car idles at a high RPM.

Further, vacuum leaks occur because vacuum hoses get dry and crack with age, especially if the vacuum hoses are exposed to extreme temperatures.

Additionally, a vacuum leak can occur if there is a loose connection or a cracked fitting.

A car battery is one of the most important parts of your cars engine because your vehicle will not start without it.

As such, a dead battery would trigger your check engine light because no electricity is created in your cars engine.

Depending on the condition of your cars battery, you can have your car battery recharged or replaced to fix the problem. 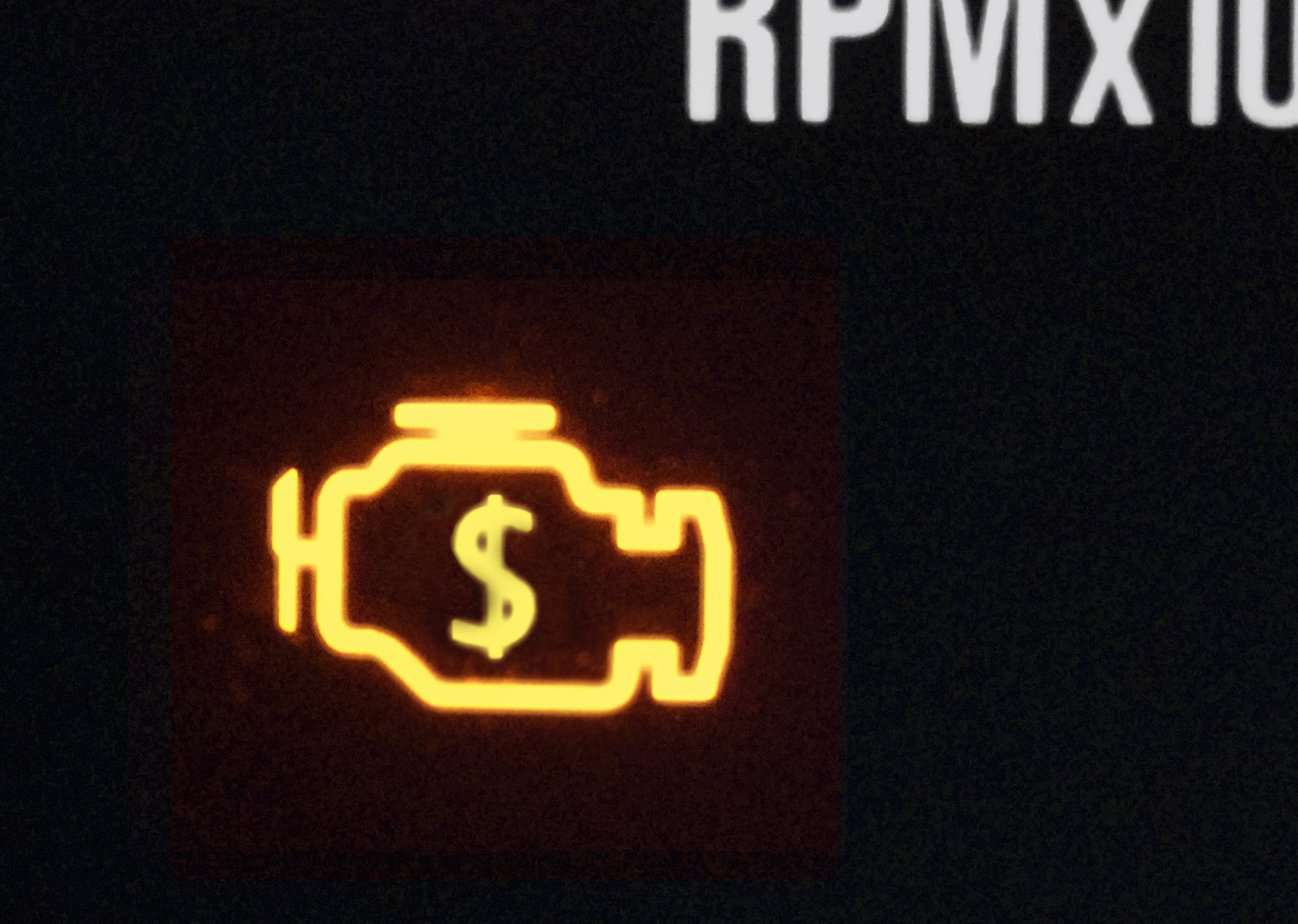 If your car is overheating, it can lead to various issues that can be dangerous, which will make your check engine light illuminate.

Normally, there will be other signs that your engine overheating is the cause, such as smoke exiting the cars hood or the temperature gauge going high.

As you can imagine, an overheating engine can be dangerous, so you should have your car checked by a mechanic immediately.

As mentioned earlier, a dead battery can illuminate your check engine, but so can a faulty charging system.

Occasionally, the issue may be with the alternator, which converts mechanical energy into electrical energy, or a different part of the electrical system.

If you have a diesel engine or gas-powered car, your car will have a fuel injector in each of the engine’s cylinders.

Fuel injectors are electronically-activated and small valves that regulate the amount of fuel sprayed into each cylinder during every intake cycle.

Generally, your engine will burn fuel that contains impurities, like carbon from the cars combustion process, that can damage the fuel injectors.

As such, your check engine light will illuminate because there will not be enough fuel, causing the engine to misfire and run rough.

It is ideal for a cars engine to be at 195-220º F because lower temperatures will use more fuel to run efficiently, whereas higher temperatures make dangerous emissions.

Generally, the engine thermostat helps regulate the temperature of the coolant, controlling when the coolant can flow to the cars radiator.

So, while thermostats are fairly basic devices, thermostats can fail, causing your cars coolant to enter your engine at the wrong times and make your check engine light appear.

For instance, your car can overheat or have a cold engine if the thermostat does not know when to release or stop releasing coolant.

That said, the evaporative emissions system canister helps filter the fuel vapor and then condenses the fuel vapors to fuel, but some of the vapors will stay.

Usually, a normal evaporative purge control valve will release the vapors into the cars combustion chambers to get burned instead of letting the vapors enter the atmosphere.

Additionally, the connector can get corroded and disconnected from the valve, making your check engine light turn on.

Your engine could get wet, causing your car to have various readings that can make the check engine light illuminate.

For instance, an issue in your cars hood could make rain water go through your engine and drip onto a spark plug, causing a short in the electrical system.

Normally, you would know that a damp engine is your issue if your check engine light appears whenever you drive while it rains.

Certain cars will be very sensitive, meaning a small problem like low or bad octane fuel can trigger your check engine light.

Also, if you use bad or low octane fuel, your car may not run optimally, causing your check engine light to appear.

As such, switching to higher-quality octane fuel can help your car drive more efficiently and get rid of the check engine light.

Also, your oil light will illuminate alongside your check engine light if you have low oil pressure. Generally, low oil pressure is caused by the cars oil pump getting old or from overuse.

Additionally, low oil pressure can be the result of an improper oil change that made air enter the pump or from adding too much oil.

Usually, the intake manifold gasket is in charge of feeding air and occasionally coolant or fuel into the cars cylinder head.

However, a faulty intake manifold gasket can make your car idle roughly while making your check engine light appear.

Fortunately, there are various signs that your intake manifold gasket is to blame, such as spotting coolant leaking from your car.

All cars have knock sensors that help increase torque and reduce fuel consumption during ignition.

Normally, knock sensors identify the high-frequency engine vibrations of knocking and then transmit signals to the electronic control unit.

So, if there is something wrong with your knock sensor or the circuit of the knock sensor, a module will trigger the check engine light.

Typically, you will know that you have a faulty knock sensor if the engine creates a metallic pinging noise, especially if your cars engine is under a heavy load.

As mentioned earlier, a spark plug works by sending a spark to ignite the mixture of fuel and air, but a spark cannot be made without the ignition coil.

That said, an ignition coil works by making high voltages needed to create a spark for the spark plug to generate power.

As such, the cars engine will misfire and affect the cars emissions, causing your check engine light to appear.

Normally, your check engine light will appear as a signal that there is something wrong with your engine, but it does not tell you exactly what is wrong with the engine.

While there are many possible reasons that your check engine light is on, some common reasons include fuel injectors, spark plugs, ignition coils, faulty sensors, and more.