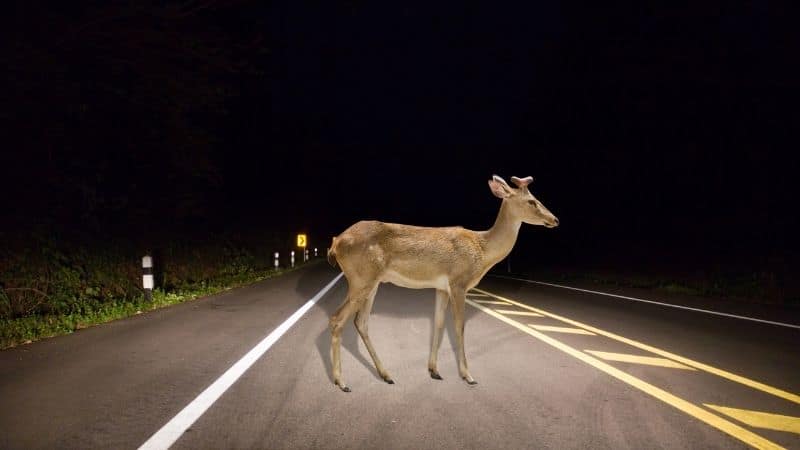 We’ve all seen it before, deer leaving you no other choice but to hit them while deploying the airbags, ruining a front-end, and possibly leaving one or more occupants of a vehicle injured.

But what’s worse than a deer crossing in front of you when you’re driving? That would be a deer that runs out in front of you and stops in front of the car. What makes them do this and why? Read this article to find out!

Why Do Deer Freeze In Headlights?

Deer are crepuscular, which means they are most active during dawn and dusk hours. Their pupils are elliptical and dilate to cover the entire width of the orb. When a deer looks up into headlights, they go completely blind, and until their eyes dilate back to an appropriate size to see what’s going on, they stay frozen.

There is nothing we can do to keep deer from running across the road while we’re driving or even keeping them from freezing in our headlights, so what’s our best option in these situations? For more useful facts and tips, keep reading!

Why Do Deer Stop When They See Headlights?

When deer migrate around at night, their pupils are completely dilated so they can see better. This is an advantage for a deer for many reasons, but a huge disadvantage when it comes to avoiding traffic accidents.

These maxed-out dilated pupils cause them to go blind when they see headlights, which causes them to experience a state of confusion and fearfulness of the situation.

By the time a deer’s eyes dilate enough to realize what is going on, it’s too late, as you have already hit the deer with your vehicle.

Should You Flash Your Headlights at a Deer? 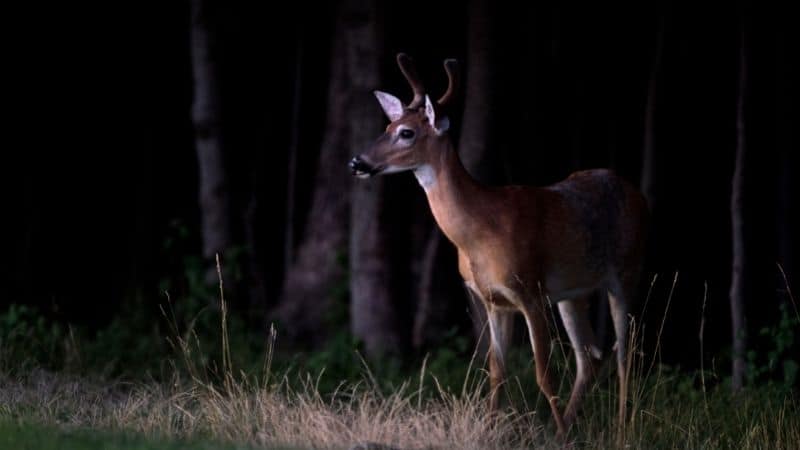 If a deer freezes in your headlights and you have enough space or time to do something about it, the best thing to do would be to turn off your headlights as fast as possible and blow your horn.

This action will help the deer retrieve their eyesight and the horn will scare them enough to get moving. However, if you flash your headlights at a deer, sometimes they will stay blind and confused.

Why Do Deer Jump in Front of Cars?

There are many reasons why deer jump in front of cars, but the biggest reason is the headlights blind the deer, and that scares them. And since they can’t see when they look into headlights, they don’t know they’re jumping in front of a vehicle.

But why do they feel the need to cross the road anyway? Deer cross roads all the time to retrieve food, to bed, or to mate. Deer don’t know the difference between a road and a desolate back trail in the woods, rather, they’re just following a scent.

High beams really aren’t going to deter deer from crossing the road, they’re either going to cross or they’re not, and in a lot of cases they don’t even know until the last minute.

But your high beams can be used for your benefit, as they will let you better see the animal, mainly the glow of their eyes.

Using your high beams might help you recognize a deer from further away, and you can start preparing to slow down earlier.

Do Deer Whistles Work on Cars? 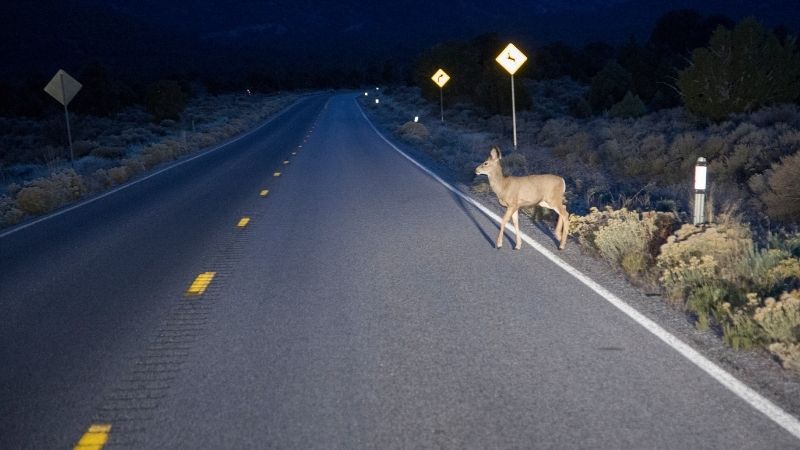 There is no scientific data that says deer whistles are going to disrupt deer activity by the road sides.

Some experts say that by time a deer hears the whistle versus the amount of roadway a car covers per second, the deer will have already made the decision of whether they are going to cross or not.

However, there are some people who swear by them and say that for the price (somewhere around $10), you can’t have too much protection. If a whistle can stop one deer, that might be just one less accident they have to worry about.

Bright lights blind deer at night. Unlike humans, deer don’t have lenses on their eyes that protect them from harmful UV rays. Therefore, it’s not a matter of whether deer like lights, as much as the fact that lights blind deer.

Should You Honk at a Deer?

Some experts say that one long honk at a deer is more effective than a deer whistle and other gizmos that claim to deter deer from getting out in front of you and stopping.

While headlights blind a deer, their ears still work, and the sound of a horn coming at them getting louder and louder just might cause them to move.

Is it Better to Hit a Deer or Swerve?

The best thing to do when a deer runs out or stops in front of you is to brake (as long as it’s safe to do so), shut off or flash your lights, and blow your horn.

You should never brake too hard in this situation, but try to slow down to reduce impact, and never try to swerve out of the way.

Swerving out of the way could cause you, your passengers, and your vehicle more danger and injury then if you just keep going straight.

Do You Speed up or Slow Down When You’re About to Hit a Deer? 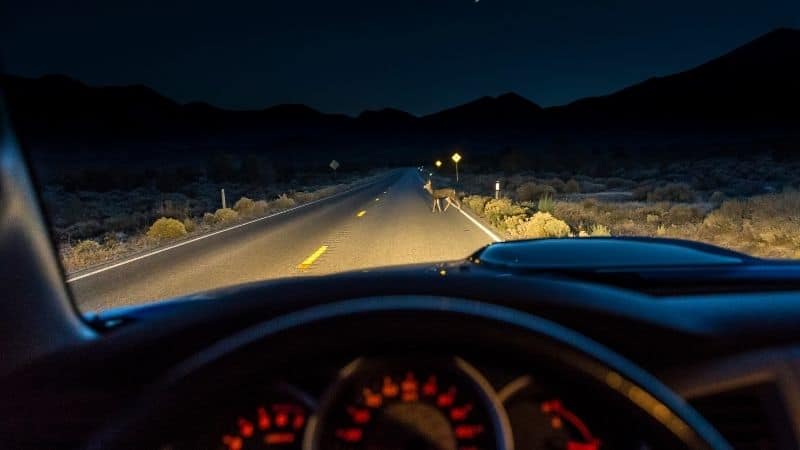 The last thing you want to do when you see a deer is speed up, as this will only increase the damage of the impact along with maximizing the injuries you and your passengers incur.

Slowing down when you see a deer is an option, but only if it’s not a dangerous option. If slowing down means locking up your brakes, it will probably be better off to just prepare for impact.

What Does ‘Like a Deer Caught in the Headlights’ Mean?

When a deer looks up at a set of headlights, they freeze because they go completely blind. It’s the way their eyes operate to see better in the darker hours of the day.

If someone is caught off guard or completely surprised by something, maybe even frightened, sometimes they’ll freeze up, and won’t know what to say or how to act.

When someone freezes up when they are caught in a lie, for example, the phrase “you look like a deer caught in the headlights” is commonly used to describe the person’s current state.

To know more about headlights, you can also see our posts on what headlights are the brightest, why do headlights get foggy, and how many lumens are car headlights.

Deer go completely blind when they see headlights, which is what causes them to freeze in place.

The best thing for a driver to do in these situations is to not try to swerve out of the way, and if slowing down is too dangerous, just embrace for impact. What works best is to quickly turn off your headlights and lay on the horn.