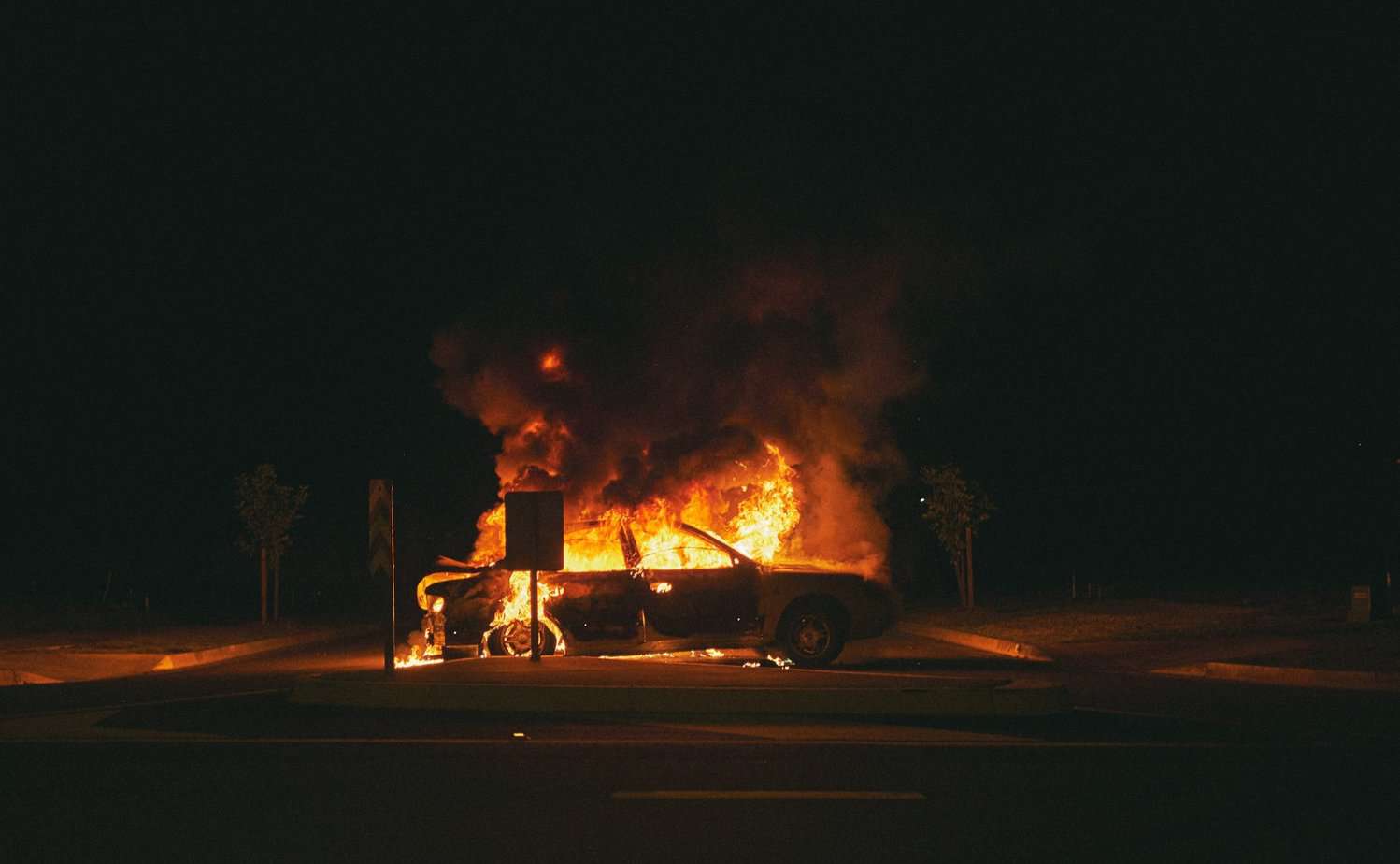 Cars are pretty complex machines that contain a lot of moving parts. It only means things can go wrong, which can cause them to catch fire.

Learning about these causes is essential to prevent fires next time your family is out for a nice drive! So here’s what I’m going to discuss about why cars catch fire from time to time!

Why Do Cars Catch On Fire?

Gas leaks are caused by the fuel getting into the car’s electrical system.

That being said, the gasoline in your tank is highly flammable, so if there are any leaks in other parts of your engine that aren’t designed to handle this kind of pressure, they can malfunction and cause an explosion.

Moreover, these fluid leaks can happen anytime during your car’s life, but they’re most likely to occur during the first few years of owning your vehicle.

As a result, fuel is highly combustible. However, a small spark is all that is needed to ignite a fire!

Many cars are designed to release excess heat through exhaust pipes and vents, but this doesn’t always happen correctly.

Especially if you have poor maintenance habits like not regularly checking for cracks in your car’s exhaust pipe or radiator cap.

In addition, a defective radiator fan, a faulty relay, a leaking radiator, or a faulty water pump are examples of engine overheating causes.

Overall, it is hazardous if it occurs while driving, which may eventually lead to a fire within minutes!

When you think of car accidents and fires, you probably think of the results of a crash—a car smashed by another vehicle or hit head-on.

Read More:  Why Does My Truck Shake When Parked? (9 Reasons Why)

Undoubtedly, the leading factor in car accidents is inattentive driving. Thus, a distracted driver is not entirely focused on the road.

As we all know, the ideal circumstances for fire include tremendous heat and spilled liquids from car crashes.

Consequently, a significant enough blow will probably result in smoke, fire, and explosion!

In 2018, there were about 181,500 reported highway car fires, according to Statista’s updates.

While crashes bring on some car fires, these fires are more frequently the result of issues with a vehicle’s busted electrical wirings.

Apart from this, the entire vehicle is covered in electrical wiring, which is found in areas like doors, beneath the carpet, and heated and powered seats.

Due to the current overload caused, the insulation on the wires may melt, and a fire hazard may result!

One of the biggest causes of engine fires is failed installation of accessories.

At this time, when you’re positioning accessories for your car, it’s important to make sure that the installation process is done correctly.

Besides that, wire insulation will deteriorate and become easily compromised if it rubs against metal or hot components.

For that reason, the accessory is safe, but the problems start with lousy wire routing, bypassing fuses, and drawing too much current! 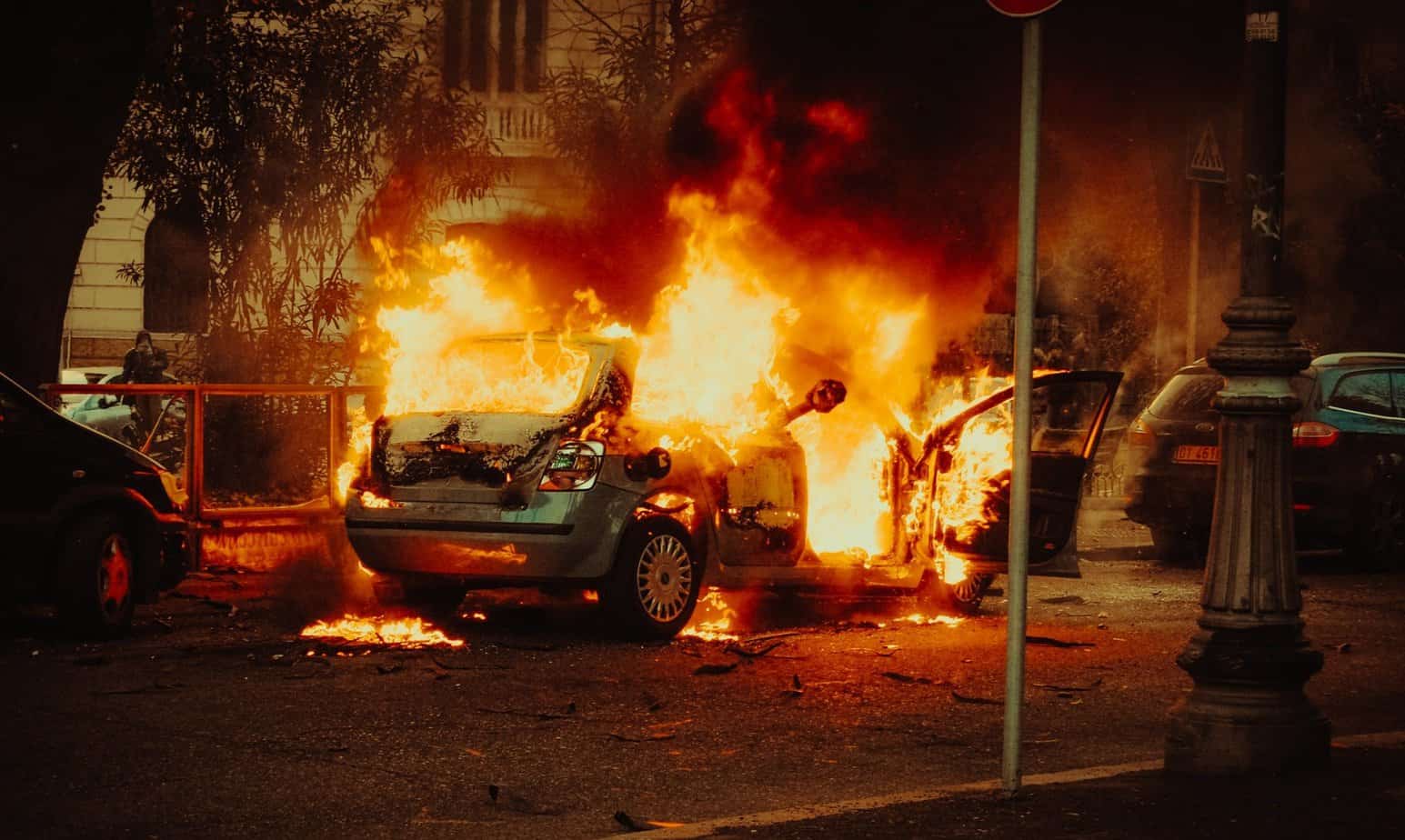 Your car’s catalytic converter is a component that purifies exhaust gases.

When these components malfunction, they can increase the amount of heat the engine produces, resulting in a buildup of pressure and eventually causing your catalytic converter to malfunction.

When the converter overheats, it can cause the metal to expand and warp, leading to a fire!

Despite being flammable, tires rarely catch fire. However, if you keep a lot of tires in one location and the right circumstances for combustion exist, they could become dangerous.

That is why the concentration of these substances can result in an explosion because the chemicals in these tires are already combustible.

For that reason, tires contain flammable chemical compounds; thus, if tires are exposed to intense heat or direct sunshine, they may catch fire!

Due to the fact that Kia and Hyundai employ the same suppliers and parts, problems with engine failure and fire have been attributed to both brands.

As a result, both auto companies have recently been compelled to recall vehicles because of fire dangers!

Most EV vehicle fires result from high-speed crashes; however, others are caused by problems other than battery overheating.

In that case, a cell has a propensity to fall short.

Therefore, a single cell shortfall can set off a chain reaction that raises the temperatures of the cells nearby, resulting in a severe thermal runaway that gradually ignites a fire!

If you’re unsure how much maintenance a particular part needs or how often you should perform specific tasks regularly, consult an auto mechanic before doing anything else with your vehicle.

Read More:  Why Is My Car Defrost Not Working? (11 Reasons Why)

As a result, your car may become far more conducive to the conditions that start fires if you fail to fix broken parts, leaky seals, or defective wiring.

Above all, a fire may start as a result of improper maintenance being neglected on your vehicle!

Setting a fire intentionally is a crime called arson. However, it could also be done to hide the evidence of a different crime.

Also, arsonists often target cars that do not belong to them because they believe the vehicles will have more value than their actual worth if burned down completely.

Investigators claim that one of the motives for setting fires is the desire for vengeance among arsonists. As a result, they often become angry and flee, setting fire to the area.

For some reason, starting a car on fire is not difficult. Arson investigators frequently search for electrical shorts or interference with the fuel system!

Regular car maintenance may extend the life of your car, save fuel costs, and bring down the entire cost of car ownership.

As you can see, several variables could be at play, including gas leaks, engine overheating, and collisions.

Ultimately, knowing what to do while driving if you smell smoke or see flames from your automobile can prevent accidents or save lives. It’s essential to keep your cool when moving quickly!