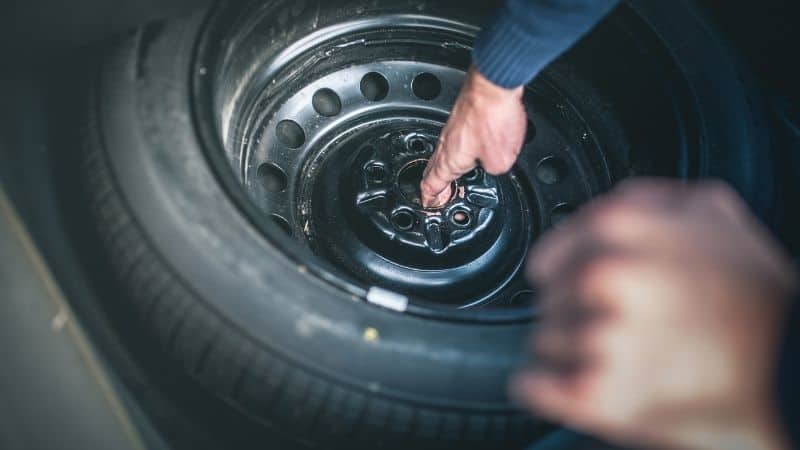 As a driver, you’re likely to get a flat tire or a puncture at one point in your life, meaning you’ll need to repair the damage. While older cars came with a spare tire to remedy this issue, newer models now have a donut.

However, you may wonder what the difference is between a spare tire and a donut. If you’d like to find out, keep reading!

A spare tire is a traditional full-size tire, usually the same size as driving tires. When you get a flat, you can replace it with this tire which offers the same performance and handling. On the other hand, a donut is a much smaller option than the standard tires, and are only meant to be driven for short distances.

For more information about spare and donut tires, their differences, how long you should drive on each of them and more, keep on reading for more useful facts and information!

Spare Tire Vs. Donut: What Are The Differences?

Now that we’ve established what each of these tires does, what are the major differences you should know? Listed below are the main differences:

One of the main differences between a spare tire and a donut are their different sizes. Donuts are smaller than the standard spare tire, so they have a smaller contact area on the road, which reduces the traction.

Because of their size, donuts are more likely to be found in smaller vehicles such as sedans since they are ineffective for heavier vehicles.

Spare tires can be used as regular tires because they’re of the same size and weight. Because of this, they support the normal weight of the vehicle, maintaining the usual performance.

On the other hand, donuts are smaller, so they can’t support the car for long, affecting performance and handling, which is why they need to be replaced as soon as possible.

It’s not safe to drive with a donut for longer distances due to their reduced handling and performance.

You shouldn’t drive with a donut spare for more than 70 miles, otherwise, you’ll cause excess damage and wear to your brakes, wheel bearings, and suspensions due to the car weight.

Furthermore, since this tire has a lightweight design, you might get another tire blowout or permanent tire damage. Donuts are meant to be discarded, meaning you shouldn’t use them past the recommended distance and they should be replaced as soon as possible.

On the other hand, you can drive for longer as long as the tire is well inflated with a spare tire. It works similar to the other three tires and will not affect your mileage.

Apart from the distance, you also need to watch your speed. Spare tires will not be affected as long as they are in good condition, as you can drive at the allowed speed without any issues.

However, with a donut, you shouldn’t go above 50mph because of the size. These tires are not built to handle higher speeds due to a lack of tread. In addition, they are extremely sensitive to bumps, so you should avoid sudden movement.

When driving with donuts, avoid quick maneuvers since they spin faster and have lower amounts of grip. 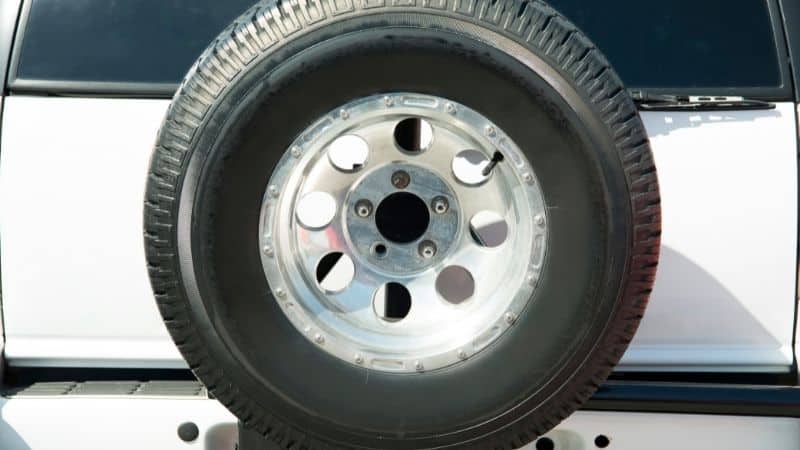 Donuts are made using inferior rubber, which makes them wear out quickly. Because of this, they can’t handle the road like the standard spare tires.

On the other hand, spare tires are made of the same materials as your driving tires, therefore, they have a longer lifespan.

For cars that don’t come with spare tires, drivers are constantly looking out for cheaper alternatives.

Compared to spare tires, donuts are much more expensive despite wearing out much quicker, which is also a concern for most car owners.

On average, donuts can cost as low as $50 and as high as $300. To find the cheaper options, you can check your local tire shop or online sites like Amazon.

One of the reasons that cars come fitted with donuts is because of the storage space. Since they’re smaller, they can fit in the trunk of a sedan or a hatchback.

Read More:  Under Inflated Tires Symptoms (8 Things To Be Aware Of)

Spare tires are larger and weigh the same as the driving tires, therefore, you need to have enough storage space for them to be added to your car. Additionally, these tires increase the weight of the car and affect the gas mileage.

What is a Spare Tire?

Spare Tires are typical full-size tires that are added to a vehicle by the manufacturer as a replacement for flat tires.

Traditionally, all cars came equipped with spare tires, but now automakers sell vehicles without a spare to reduce the weight.

For the cars that still have a spare tire, the spare is designed to be the same size and weight as your driving tires. Therefore, you can use it as a replacement once you get a flat.

Spare tires are ideal because they allow you to drive normally without any changes in performance and handling. Therefore, if your car has a spare tire, it’s advisable to include it during rotation, wheel balancing, and alignment.

Ideally, a spare will have the same dimension, tread pattern, and same brand. Therefore, including your spare in regular maintenance ensures that it’s properly inflated, balanced, and wears out at the same rate as your regular tires.

Spare tires are mostly included in larger vehicles such as SUVs and pick-up trucks, which are much heavier.

What is a Donut? 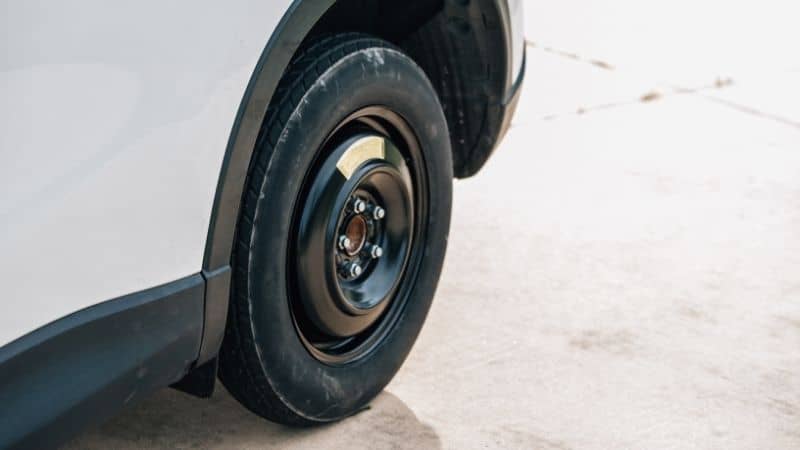 In order to save space and reduce vehicle weight, many manufacturers have replaced the standard spare tire with a smaller version known as a donut or space saver.

Generally, donuts are temporary tires and are much smaller than the standard versions. Additionally, they’re meant for traveling at lower speeds and shorter distances.

Due to their size, these tires are easier to keep in your car, especially for smaller cars such as sedans and hatchbacks.

How Long Can You Ride On a Spare Donut?

If you have a donut, you shouldn’t drive it for more than 70 miles. Space savers don’t have enough traction to handle a larger distance, therefore, it’s advisable not to go past this number.

Read More:  How Long Will Tires Last With Bad Alignment? (All You Need To Know)

It’s advisable to change them as soon as possible at a tire repair shop to get back your vehicle’s normal performance.

Is it Better to Have a Spare Tire Or a Donut?

A spare tire is ideal if you need to drive for longer distances, because you won’t need to immediately go to an auto shop, as tires perform optimally like the rest of the tires.

However, if your car is smaller and you have limited space, a donut might be a better trade-off. Although you can’t drive with it for longer, it doesn’t take up too much trunk space in your car. In addition, it might be a better option than having no spare at all.

Is a Spare Tire Necessary?

If you constantly drive longer distances to places without many service stations, you’ll need a spare tire (this also applies to drivers who drive on rough terrains).

A spare tire will come in handy on these occasions, especially if you get a flat in the rural areas which might be a hundred miles away from the nearest auto shop.

Therefore, if your car didn’t come with a spare tire from the manufacturer, you can buy one from local tire shops, retailers, or Amazon for safety purposes. In this case, a donut might not be ideal because you can’t drive for longer distances.

To know more about tires, you can also read our posts on how long do spare tires last, how much are used tires, what to do if you have a flat tire and no spare tire, and if you can put air in a spare tire.

A spare tire is similar to your driving tires and performs the same on the road, whereas a donut is smaller and only meant to be driven for shorter distances.

If your car has a spare, you can continue driving normally until the other tire is repaired. However, with a donut, you need to have it replaced at the nearest tire shop as soon as possible to avoid further damage.