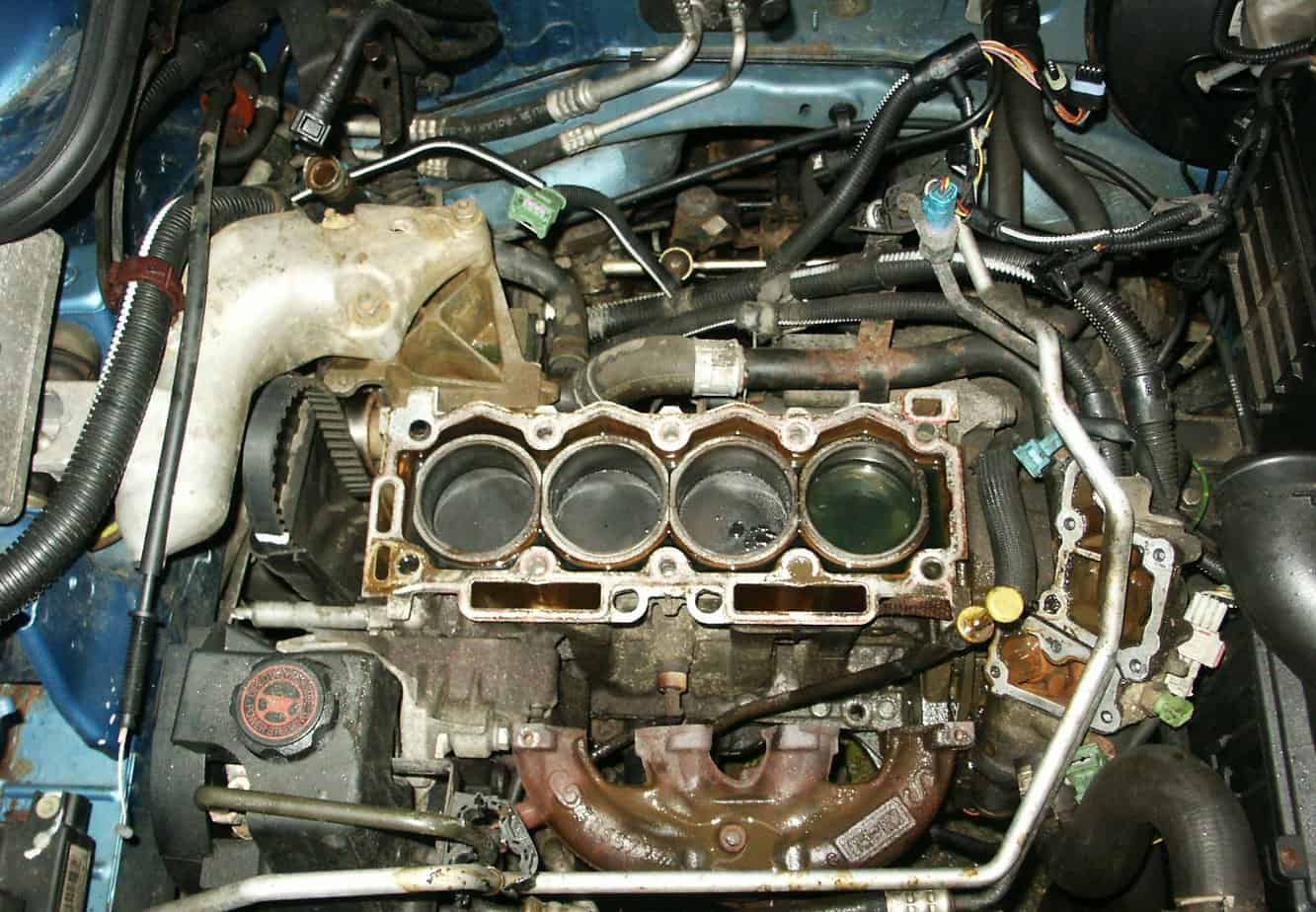 A blown head gasket is a real annoyance. Leakage in your head gasket implies your vehicle is taken off the road for repair work, and in the most unlikely scenario, your engine suffers significant damage, and you may have to scrap the car.

Therefore, understanding what causes a blown head gasket is critical so you can spot the signs and respond before it’s too late. So, join me in discovering more about it!

Why Do Head Gaskets Blow?

Your vehicle’s thermal energy causes the metal to expand and contract. Mechanical creep damages the head gasket, especially if it’s made of a highly rigid material. As a result, head gasket fatigue occurs, indicating that a blown head gasket is inevitable. The other culprit is head bolt overtightening, with the bolt pressure squeezing the head gasket component.

Here are 11 reasons why your head gasket blows. Then, stay with me as I uncover several other reasons. Read on!

A head gasket problem may have been influenced by the engine overheating many times (due to clogged radiators, coolant leaks, faulty fans, and so on).

However, a blown head gasket would also end up causing the engine to overheat.

In addition, burning exhaust gases might flow into the cooling system, or coolant can leak into the cylinders and be fired off as steam, resulting in an overheated engine.

So, if the vehicle is driven while getting too hot, the alloy cylinder head may warp, or steam may damage the catalytic converter, doubling the repair cost considerably.

The cylinder’s compression is lowered if the head gasket fails so that even the compressed air/fuel escapes.

Of course, a specific loss of compression causes the engine to run poorly and significantly reduces engine power. This type of failure is usually followed by a sound similar to an exhaust leakage.

The milky material on the undersurface of your vehicle’s oil filler cap or dipstick, sometimes mistakenly referred to as a “milkshake,” is among the most well-known indications of head gasket malfunction.

It happens when the coolant gets into the oil and inversely. Although it’s not conclusive solid evidence of head gasket breakdown, this is an excellent indicator that your engine needs to be disassembled to discover the source of pollutants.

Any driving would instantly mess up the engine’s bearings if the oil were contaminated with antifreeze.

Therefore, repair necessitates at least an engine oil flush and a substitute oil filter, complete dismantling of the engine’s bottom end to ensure the bearings aren’t compromised, and direct out all contaminated oil.

It is due to antifreeze leaking through the gasket and entering the cylinders, which are converted to steam during combustions.

A leak from an oil route to the cylinder that would end up causing blueish smoke is much less usual but still possible.

These gasket failures will enable combustion pressure into the cooling or oil breather system.

For example, it could be the case if a radiator hose instantly blows off its water vent or the dipstick won’t stay in place.

A simple oil or coolant leak can occur if a head gasket fails between the oil or water passage and the engine’s exterior. It is a less severe form of a blown head gasket, yet it is still serious.

It may not cause a more severe problem than just a mess, but allowing the coolant level to drop too low can result in more severe engine problems.

Another concern is that spilling oil could end up in the hot exhaust, causing acrid smoke and fire. 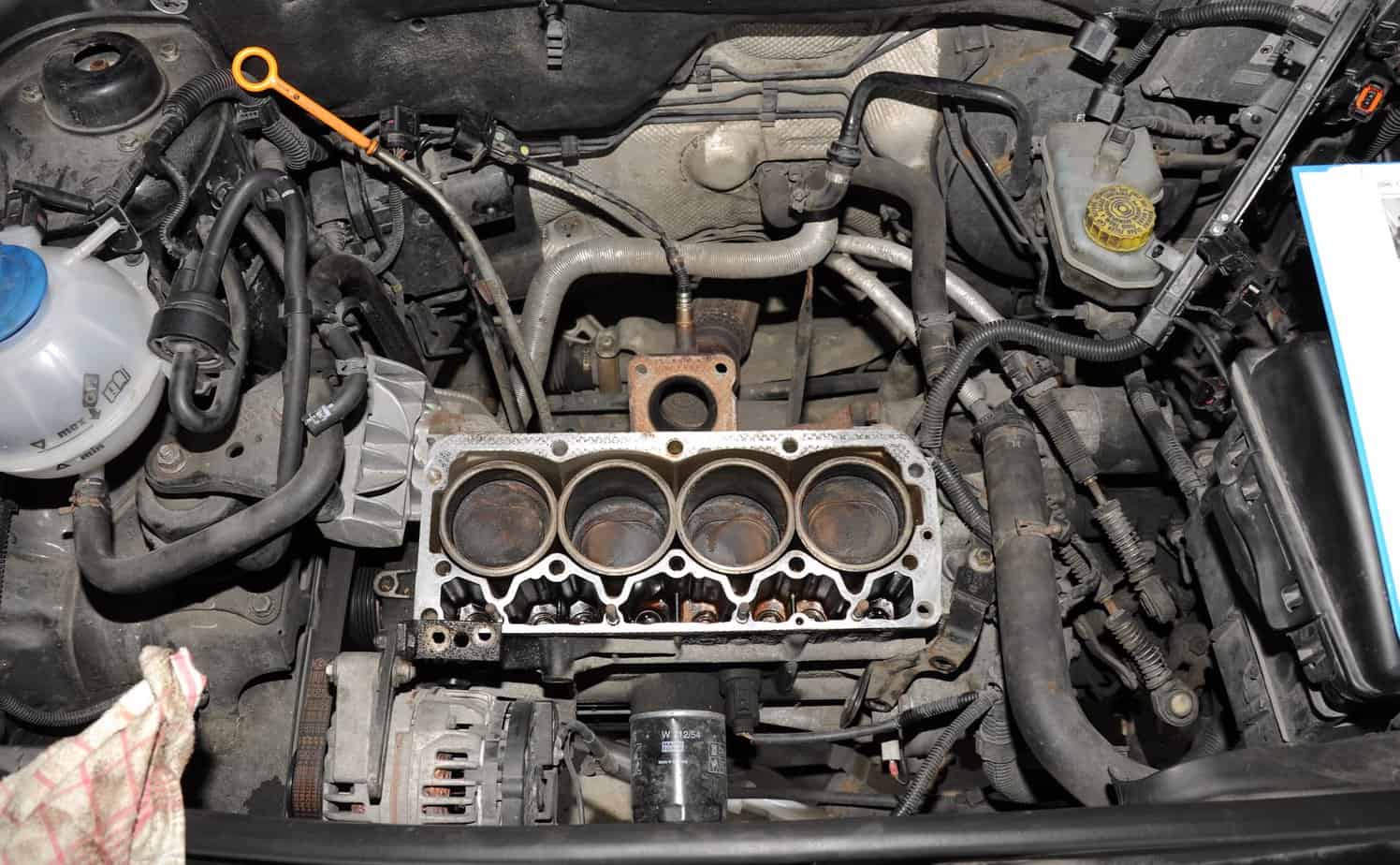 The head gasket contracts and expands in response to engine temperature.

Of course, the reaction of the sudden and unexpected temperature change could also end up causing a head gasket failure whenever you start your engine cooler and instantly place your foot down.

Gaskets degrade over time. A vehicle with many miles that has never had a head gasket replacement may have problems.

The components in the gasket can degrade over time and no longer seal as effectively as they once did.

As a result, manufacturers recommend replacing the head gasket after a certain number of miles.

Therefore, if you have exceeded that mileage, you are more likely to experience a blown head gasket.

When your engine is running, it generates a lot of heat. Because of the variation in thermal expansion levels between your head and block, the head gasket in-between is attributed to mechanical stresses and high thermal that gradually wear down the gasket.

Vibration: Both natural vibrations from your vehicle’s engine and those caused by driving on the highway wear down your head gasket in the long run.

Read More:  Why Does My Car Leak Water? (9 Reasons Why)

Further, your head bolts that maintain the head gasket tucked between the head and block can expand (and possibly distort) over time, resulting in additional friction and vibration wear.

10. Incorrect Installation Of The Head Gasket

If you improperly install your vehicle’s head gasket, it is unlikely to sustain a seal for a considerable time.

So, if you had your head gasket replaced but experienced problems soon after, there could have been a problem with the installation.

Premature head gasket problems can result from both detonation and pre-ignition.

In addition, these two circumstances cause high temperature and pressure in the cylinder, placing extreme strain on the gasket and the pistons and valves.

Pre-ignition happens prior spark plug igniting, and detonation occurs after.

To know more, you can also read our posts on why battery terminals corrode, why new brakes are squeaking, and why your gears are slipping.

This post investigates the causes of most frequent reasons for head gasket malfunction.

Being aware of the various sources of possible problems can assist you in diagnosing the condition(s) that led to your vehicle’s blown head gasket on your specific engine.

Or it can prevent your gasket from screwing up in the first place.